What Happens After the Game? Keeping Everyone Safe

There are few things in high school athletics more thrilling than a Friday night football game coming down to the final seconds, with two excited fan bases hoping for the opportunity to celebrate a monumental victory. But if you work in athletic administration, there are also few things that cause your heart to race more, envisioning all the potential liability as the game ends and you are now in charge of securing the safety of not only your students, but also thousands of attendees who are either visiting students or people who have no daily connection to high school life.

In short, you are in charge of a large group of excited and emotional people who likely have no clue who you are, or the mission of your educational athletic program. These moments, where safety becomes paramount, are where your relationship as an athletic administrator, with your school leadership team and local supervision team, becomes visible for all to see.

The Importance of the Game Management Plan

Hopefully, you are already sending the visiting school a game management plan before each event. While this management plan will include information relating to items such as admission charges and entry to the facility, it should also include details such as where the bus will need to be parked for exiting after the game, whether the team has access to the locker room after the game and how long the coaches have to speak to the team after the game.

At our facility, the locker rooms are beyond where the team bus parks for a football game, and in a different direction than the bus after a basketball game. The locker rooms are also in the middle of our most congested walkways after games, so we do not grant locker room access after a game, and all of our visiting teams know this beforehand.

For basketball games, we have team rooms adjacent to the court where we usher both teams following the game. From the time they enter the team room, both coaches have an approximate 10-minute time limit to speak to their players, something which has been agreed upon by our league’s Board of Managers. Our goal during this time is to clear the facility as much as possible, so the teams can then exit and have a clear path to post-game transportation.

As athletic director, I have a consistent message that is sent to our administrative team and local supervision team, which includes both our campus supervisors and local police. The simple message informs individuals that after the initial reaction to the game inside the facility, I will take care of the inside, while others on the team are located outside the stadium.

An important thing to remember is that the timing of supervision needs to have flexibility, based on the outcome of the event. If a game is one-sided, we send people on our supervision team to outside locations at an earlier time since fans will begin to leave earlier and in a more staggered manner. If the game is close, however, those individuals remain in the facility for a longer period of time.

For the safety of our athletes and those in attendance, we do not allow fans to rush the field or the court after the game, and ensuring that this rule is enforced requires the presence of people from our supervision team. As soon as the immediate rush of energy begins to fade away, it is then time to get some additional supervision to external locations, following the way in which the crowd disperses and fills up the walkways and parking lots.

We provide a script for the public-address announcer, which includes items such as sponsor recognition and snack bar announcements. But more importantly, it also includes a script for sportsmanship announcements and timed-out messages to our spectators. These timed-out messages are read at three different intervals during the final period of play, instructing students who do not drive to contact their rides and coordinate pick-up times. This timing can greatly reduce the burden on the administrative team by clearing the parking lots in a shortened timeframe and limiting the number of students waiting for their rides after the game.

If you have the option at your school, the athletic director should consider carrying a wireless microphone at bigger events. There is occasionally a need to modify an announcement or add messages, so this works better than text messages that might not get seen or a walkie-talkie radio that is difficult for an announcer to hear with a large crowd. This would allow the athletic director to make a quick announcement and expedite the process while keeping control of the environment.

If these processes do not happen in the desired timeframe, we have a couple of additional tools we can use. One is the action of our assigned custodians, who absolutely must feel like valued members of your team. In either facility, they are asked to begin sweeping the stands from the top down, and their presence serves as a reinforcing reminder that it is time to leave.

Another tool is the lights. While having these on is a valuable security resource, turning off merely one bank of lights is a visual cue to those in attendance that it is time to leave. Upon the desired response from those exiting the facility, this bank of lights can go back on to help the custodial team. In the case there are still too many attendees in the facility, the wireless microphone can be used again to make any additional post-game announcements.

One of the biggest key pieces is maintaining a strong relationship with your local law enforcement. We are fortunate enough to have a great School Resource Officer, as well as other members of our local police force who enjoy being at our events. Our students recognize them, enjoy seeing them and understand they are there to ensure safety. Their mere presence is a deterrent to those who might otherwise start issues.

For me, keeping this relationship is vital to our success. I thank them each time for being at our events, and make sure they know that I have food and drinks waiting for them should they need anything. Those are small gestures, but ones which convey the message of importance and let them know that they are valued members of our event.

Nate Smith is the athletic director at Heritage High School in Brentwood, California, where he also teaches physical education. He has served as a head varsity football, cross country and track coach at the high school level, and has also coached softball, water polo and tennis at either the high school or collegiate level. He is on multiple section seeding committees, and also serves as the senior content manager for prep- 2prep.com, a website dedicated to coverage of prep sports in northern California. 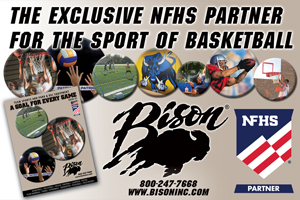