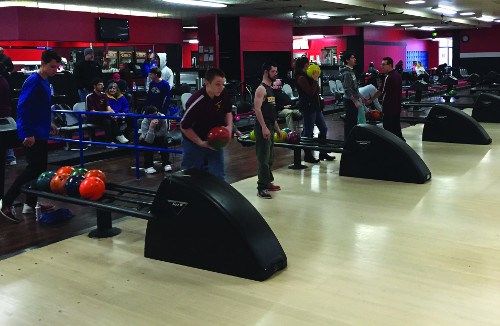 What do football cleats and bowling shoes have in common? That may sound like the beginning of a bad joke, but for one Maryland school district, the two types of footwear can be tied together by more than just laces. At the end of each fall, a number of head football coaches in the Baltimore County school system trade in the football gear for bowling balls and pins in anticipation of the official start of Allied bowling season.

Allied bowling, which mainly features students with disabilities but also includes some less athletically-inclined, able-bodied students who have not participated in a varsity or junior varsity sport in the past, is part of the larger Allied Sports offerings that have been available in the district since 1994. More and more head coaches of traditional sports have become interested in coaching Allied teams in recent years.

“I got involved about eight years ago, looking for something fun to coach in the winter time between the intense football season and baseball season,” said Hereford High School head football coach Ric Evans. “We laugh every single day, whether it’s practice or a match. Somebody will get excited if they get a strike or a spare and yell, or come up with a dance.

“They also work hard to improve their average every time out.”

Mike Gunthrop, head football coach at Owings Mills High School, ended up coaching Allied bowling at his school as a substitute after a coworker got into a car accident. He stayed on after the coworker decided to retire that summer and led his team to the western division championship last year.

“I was only filling in for that one season, but really enjoyed it,” Gunthrop said. “It was a welcome change of pace going from football season into a season with a group of students who enjoy just being out there, enjoy competing without all the stresses and pressures that come along with other sports such as football and basketball.”

While there aren’t many similarities between the two sports, both coaches said the transition is an easy one to make. Evans used to bowl competitively in leagues when he was younger, but Gunthrop had no previous experience with bowling. Once he realized Evans was a fellow Allied bowling coach, Gunthrop made sure to get some advice from the more veteran coach.

“It was funny, the first year I did it, I didn’t know that Anthony [Burgos, head coach at Franklin High School] and Ric participated in the Allied league as coaches as well,” Gunthrop said. “They’ve been doing this for years so I just asked them what to expect. They said ‘It’s really nothing. Basically it’s a piece of cake because you’re just having fun with the kids.’”

As with any other athlete, “you have to be motivating, communicate, try to inspire and console, especially when they don’t do well,” Gunthrop said. “I have one young lady who actually bowls in a league and she has Down syndrome. She is, without question, my most seasoned bowler, but then there are those days when she’s out there trying different stuff and I’m like ‘What are you doing? I’m going to need you to just stick to what it is that youknow.’

“I call her my drama mama. She’s a piece of work.”

Both coaches agreed that the desire to be part of a team and a competitive spirit are no different whether they are coaching football or Allied bowling.

“Some of [the bowlers] are extremely competitive and they want to do well, but at the end of the day, it’s probably more important to most of them just to be able to participate and be a part of something, a part of a team,” Gunthrop said. “I can have a kid who may bowl a 55 in a game, but the biggest thrill for them was the fact that they got that one strike.

“That was all they needed.”

Gunthrop uses his football team to reinforce the idea that the Allied teams are just as much a part of the school community as traditional sports teams. 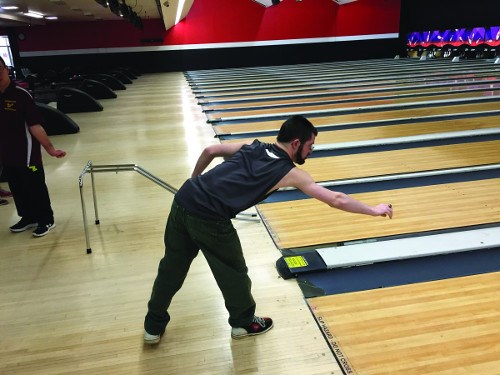 “When we’re in football season, they are in Allied soccer season so prior to football practice, if they had a home game, we would go over and just cheer them on for a few minutes,” Gunthrop said. “For them to see 70 football players lined up along the sideline cheering them on really gets those kids going.”

That camaraderie and school spirit has transferred to the school hallways as well, Gunthrop said.

“The thing I’m probably most proud of is that they get recognized as being a part of the average student body,” Gunthrop said. “The football players now see the kids in the hallway and give them high fives.

“Not that a kid will see me and do it, but just to see them do that on their own, without them even knowing that I’m present, it gives those kids the feeling that they are a part of the student body.”

Echoing that, Evans said he is also proud of the fact that the bowlers are included more now and treated like everyone else in the school.

Evans said his biggest challenge with coaching Allied bowling is just fighting the drowsiness that inevitably hits when his team is on the road.

“Honestly, [the biggest challenge is] just waking some kids up on the bus after a ride to an away match,” Evans said. “The kids are great to work with and have a real enjoyment for what they are accomplishing.”

Any challenges Gunthrop said he’s faced when coaching Allied bowling have been easily remedied, especially when it comes to sportsmanship.

“They get to learn sportsmanship, even something as simple as being courteous and letting the bowler next to you go first if they approached the lane first,” Gunthrop said. “Early on, I had to emphasize that, but today they understand all of that.

“We also make sure we shake hands prior to and post contest. And it’s more than just shaking hands, especially if it’s one of their friends at the other school. Then, it’s a big old hug.”

In the end, Gunthrop said he has gained as much from the Allied bowling students as they have from participating, whether he’s flashing them the special hand signal he made up for when he bowls a strike in practice or one of his players sees him in the hallway and excitedly reminds him that it’s game day.

“A lot of times, I find myself just being silly and cheering and trying to keep everything relaxed and low key,” Gunthrop said. “I can honestly say that had I not taken over as the bowling coach, I probably wouldn’t even engage most of them in school.