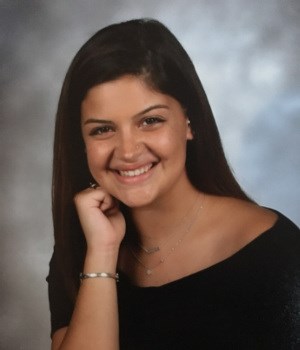 Marissa Walker, a student-athlete at Waterford (Connecticut) High School, has been selected the 2018 national recipient of the “National High School Spirit of Sport Award,” by the National Federation of State High School Associations (NFHS).

The “National High School Spirit of Sport Award” was created by the NFHS to recognize those individuals who exemplify the ideals of the spirit of sport that represent the core mission of education-based athletics.

As a youngster at Quaker Hill (Connecticut) Elementary School, Walker was an exceptional athlete with natural talent who appeared to have a very bright future.

That changed forever on February 2, 2009, when the then-nine-year-old Walker was diagnosed with Osteosarcoma and had a massive tumor on her left knee that needed to be removed. To address that, she underwent 10 weeks of chemotherapy followed by “limb salvage” at University Hospital in New Jersey where doctors removed 70 percent of her femur. Despite numerous days in the hospital and an additional 18 weeks of chemotherapy, Walker remained upbeat and certain that she would continue to play the sports that she loved.

While soccer and basketball were no longer participation options for her, pitching a softball was something that she could still do. Impressively, she pitched her Waterford North Little League team to the district championship game less than two years after her diagnosis.

The expandable prosthetic joint and femur that was designed and placed in Walker’s leg had to be adjusted every two to three months as she grew – a total of 23 times. After each lengthening, weeks of grueling physical therapy followed. The prosthetic piece broke when she was in sixth grade, which necessitated another surgery to replace it. Two years later, that expandable joint broke, which resulted in yet another surgery in which the doctors placed a permanent titanium rod in its place. Despite three more surgeries during her high school career, Walker has continued her determination to return to the field.

Walker was chosen captain of the 2018 Waterford High School softball team. Despite the many surgeries and thousands of hours of physical therapy, she is expected to pitch this spring and to contribute in a very strong program and conference.

Since 2010, Waterford High School and division rival Stonington High School have joined to compete in an annual softball game known as “The Play for a Cure Game” – an event that has grown in attendance and fundraising every year. Walker has been part of that game since its beginning – from throwing out the first pitch in 2010 to being the game’s winning pitcher in 2015.

Academically, Walker has been a high honor student since middle school, earning the Rotary Student of the Year Award in 2013. She was selected to the National Honor Society as a junior, elected to Class Council all four years of high school and is the Key Club secretary. Walker plans to pursue a medical career in pediatric oncology – a career she knows all too well from observing as a patient – and now wants to help others who will deal with the same struggles that she has faced.

According to her uncle Andrew Walker, who also is the Waterford High School head softball coach, “Marissa did not want pity early on and still doesn’t. I’ve witnessed her struggle up close … the tears, the heartache, the disappointment and the frustration. Her inner strength and resilient spirit is what makes her so special … her love of competition … her love for her teammates … and her love of the game. Cancer may have taken away her ability to run like the wind as she did in third grade, but it couldn’t touch her soul, her spirit or her heart. Marissa Walker is a winner even if she never steps on the field of play again because her ‘spirit of sport’ can never be taken away; it is a permanent part of her.”

Nominations for this award were generated through NFHS member state associations and reviewed by the NFHS National High School Spirit of Sport Award Selection Committee composed of state association staff members. While the national winner will be recognized June 29 at the NFHS Summer Meeting in Chicago, Illinois, the section winners will be recognized within their respective states and will receive awards before the end of the current school year.

The National High School Spirit of Sport Award was started in 2008. Including this year, 11 individuals and three teams have been chosen national award recipients.

The NFHS Voice: Recognition and Thanks – Not Abuse – Needed for High .