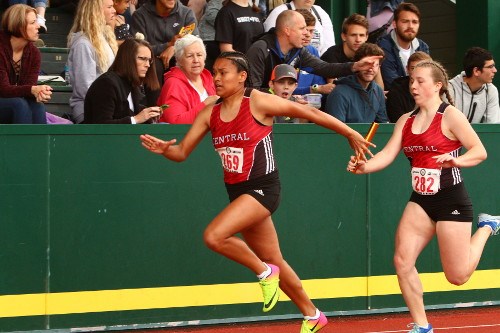 The expansion of exchange zones in short relay events, which does not require tracks to be repainted/resurfaced, as well as assisting injured athletes, are among the rules changes for high school track and field and cross country.

Seven rules changes were recommended by the National Federation of State High School Associations (NFHS) Track and Field and Cross Country Rules Committee at its June 10-12 meeting in Indianapolis, and all changes were subsequently approved by the NFHS Board of Directors.

“Previous changes to the NFHS rules created the exception that allows a competitor to assist an injured or ill competitor without being disqualified when medical staff is not present,” said Julie Cochran, NFHS director of sports and liaison to the Track and Field/Cross Country Rules Committee. “In a clear majority of these types of situations, the action is intended to be an act of good sportsmanship and not an attempt to circumvent the rules or gain an advantage.”

While the injured or ill competitor is disqualified for receiving help, the competitor helping will not be disqualified, unless that competitor – or his/her team – gains an advantage. In all cases, the final decision rests with the meet referee, who has the sole authority to rule on infractions, irregularities and disqualifications in a meet.

“The acceleration zone is now incorporated into the existing exchange zone, thus a 30-meter exchange zone for relay races with legs of 200 meters or less,” Cochran said. “The rule change does not require that tracks be repainted or resurfaced in order to follow the new NFHS rules. Existing acceleration zone markings, such as triangles, squares or colored tape, placed at that location may be used to denote the beginning of the exchange zones on a track.”

Rule 6-2-6 has been amended to prohibit athletes from running backwards or in the opposite direction (non-legal direction) during warm-ups on horizontal jumps, pole vault and javelin runways.

“This change promotes a more organized and efficient warm-up period,” Cochran said. “Competitors should now be more aware of their surroundings.”

In cross country, Rule 8-1-1 has been reorganized to clarify that a cross country course may be marked with any or all methods listed in the rule.

An additional change to cross country rules adds language to Rule 8-1-3 regarding straightaways at the start of a course. The change provides a recommended minimum distance of 100 meters for beginning straightaways, and states that no narrow section of a course should be longer than 10 feet (three meters) long. Small cones of the appropriate color, at least 12 inches (30 centimeters) high, are also now permitted to be used in lieu of painted lines or survey chalk.

A complete listing of the track and field and cross country rules changes will be available on the NFHS website at www.nfhs.org. Click on “Activities & Sports” at the top of the home page and select “Track and Field/Cross Country.”