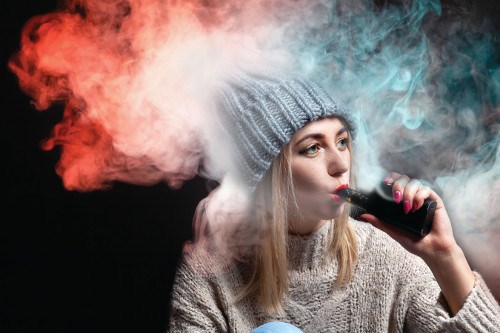 Many athletic administrators have had to confront the issue of vaping – the act of inhaling vapor created by battery- powered e-cigarette devices – within their schools and athletic programs. These e-cigarettes contain pods with a variety of synthetic flavors and a mixture of other chemicals. While these products do not use tobacco, they contain varying amounts of nicotine and THG, which is the active ingredient in marijuana.

E-cigarettes recently surpassed conventional cigarettes as the most commonly used tobacco product among youth. The popularity of e-cigarettes among teenagers has skyrocketed in recent years. In February 2019, the Centers for Disease Control and Prevention (CDC) reported a 78 percent increase in high school students vaping from 2017 to 2018. Youth e-cigarette use has been called an epidemic by major public health officials, including the United States’ surgeon general. It is essential that students, parents and educators understand what these products are and the potential risks of using the devices.

Because vaping is still relatively new, its long-term effects are largely unknown. Since nicotine consumption may have minimal impact upon athletic performance, this may be why many athletes feel comfortable smoking or vaping. Student-athletes can take advantage of nicotine’s simulation effect without jeopardizing their athletic progress or career.

There is far less research on the health effects of vaping than those of smoking cigarettes, but organizations such as the American Lung Association have gathered the results of multiple studies in one place. E-cigarette pods contain chemicals that can cause lung and cardiac disease as well as harm the developing brains of children.

The following are some practical and proactive ideas to address this serious health issue:

While there may be no way to completely eliminate vaping in schools and athletic programs, its usage can possibly be reduced through the education of students and parents by installing sensors in bathrooms and updating school drug policies. These steps will potentially help students in the future and protect them from longterm harm, and this should be the goal of every school district.

Steve Gertz, CMAA, is an Assistant Principal for Athletics and Activities at Dundee- Crown High School in Carpentersville, Illinois. He is an NIAAA Leadership Training Program instructor, and he serves as the mentor chair for the Illinois Athletic Directors Association and the NIAAA State Coordinators Committee.

Iowa Multi-sport Athlete Does it All – With One Hand