The NFHS is tracking the status of high school sports as fall seasons approach. Because of the pandemic, several states have delayed the start of the fall sports season or altered the sports seasons.

As of October 23, the following state associations have delayed or altered the Fall season. 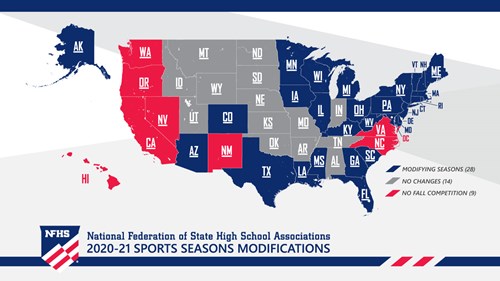 In addition to the map above, encompassing sports seasons modifications nationwide, the following sports-specific maps are available for download:

Georgia (The Georgia High School Association postponed the start of football season until September 4; while permitted to continue practice, competitive cheerleading competitions are delayed until November 21.)

New Mexico  (The NMAA, through Governor recommendations, canceled contact sports competition for the fall. As a result, the 2020 football and soccer seasons have been switched to the spring semester.)