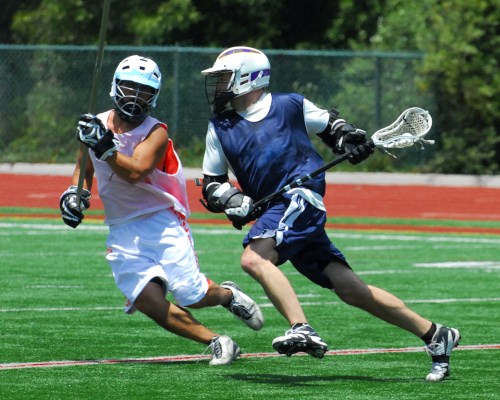 Modifications introduced to the faceoff rule in high school boys lacrosse during last season as a result of COVID-19 proved to be a major focal point with changes adopted for the 2022 season. The change coincides with addressing risk minimization for the upcoming season, including the newly added requirement of a protective cup or pelvic protector to limit blunt trauma injuries.

A combined 15 rules changes were proposed by the National Federation of State High School Associations (NFHS)/USA Lacrosse Boys Lacrosse Rules Committee at its virtual rules meeting held July 12-14. All 15 proposals were later approved by the NFHS and USAL Boards of Directors. Due to the COVID-19 pandemic, no rules were proposed or changed for boys lacrosse last year.

“High school boys lacrosse participation during the COVID-19 pandemic proved to be an eye-opening experience,” said James Weaver, NFHS director of sports and liaison to the Boys Lacrosse Rules Committee. “This past season, a COVID-19 modification was implemented for faceoffs to assist with distance between players. Consequently, the committee saw this as a positive change for the sport that ultimately allowed for a fairer and safer faceoff format. That change is evident elsewhere, as many area of the rules addressing faceoffs and player safety have received changes for the betterment of all players and officials.”

Changes made to faceoffs by the NFHS Boys Lacrosse Rules Committee most significantly impact Rule 4-3-3. Due to last season’s COVID-19 modifications, officials first placed the ball on the ground to indicate placement of the faceoff.

This rule change, which provides a visible marker for player setup, addresses players standing rather than kneeling. (Rule 4-3-3a, f and g). The change also restricts players from using the “moto-grip” to favor a standing neutral grip, creating a fairer and safer faceoff.

As an added effort to also limit extended stalemates, the rules committee adopted new language for Rule 4-3-3. The new Rule 4-3-3i was added to ensure that faceoff players play the ball and prohibit an immediate body-check to their opponent.

“These major changes to the faceoff rule were very well received by the lacrosse community, Weaver said. “They will ultimately serve to keep the faceoff fair, while also reducing the risk of injury during the faceoff.”

Two other rules are impacted by the addition of Rule 4-3-3i.

Faceoff players who are in a potentially vulnerable position are the benefactors of new clarifications to Rule 4-4-2. At the sound of the whistle to start play, when players in wing areas are released, they must avoid body-checking faceoff players who are battling for control of the ball while still in their initial faceoff spot.

Rule 5-3-3 received new language specifying it is considered an illegal body-check when the opponent has any part of the body other than the feet on the ground, as well as when the player is crouched for a faceoff.

The continued focus on risk minimization impacts Rule 1-9-1f, as the rules committee shifted from recommending a protective cup to now requiring it or a pelvic protector for all players.

“One of the core beliefs of the NFHS is to minimize the inherent risk of sports,” Weaver said. “A protective cup helps prevent blunt trauma injuries to the groin area that can cause serious damage, including severe bruising, internal bleeding, testicular fracture or rupture. This can have serious, if not permanent damage to athletes.”

With the change to Rule 1-9-1f comes the addition that each player is personally responsibly for wearing the protective cup or pelvic protector. It also shall not be modified from the manufactured state and shall be worn in the manner intended by the manufacturer.

“One of the biggest concerns for opponents to this rule is that officials cannot and should not check to see if a player is wearing a protective cup,” Weaver added. “Protective cups should only be verified through the coaches' certification process.”

Other risk minimization changes include Rule 5-4-5, which addresses situations in which it is illegal to body-check players in defenseless positions. The newly adopted prohibition specifies that a player shall not body-check the opponent, who is considered a defenseless player, while the player is lying on the ground.

The rules committee also agreed on changes to responsibilities of the timekeeper and table keeper.

Previously, Rule 2-8-2e included responsibilities for the volunteer table crew that often put them in the role of a game official. Among those duties was sounding the horn twice at the next dead ball when a player not legally in the game enters the field of play, and when a substituting player deliberately delays entry onto the field. That language and more has since been eliminated, which restructured the rule to put the responsibilities in the hands of trained officials.

“The NFHS Boys Lacrosse Rules Committee continues to make improvements to the health and safety of the student-athletes, while also keeping the game enjoyable to play and watch,” Weaver said. “Over the past several years, the committee has been successful in reducing injuries and we hope these changes will continue to allow the sport to grow in popularity.”

For more information on these boys lacrosse rules changes, as well as all changed approved by the committee, a complete listing will be available on the NFHS website at www.nfhs.org. Click on “Activities & Sports” at the top of the home page and select “Lacrosse-Boys.”

According to the most recent NFHS High School Athletics Participation Survey, 113,702 boys participate in lacrosse in 3,026 high schools across the country.