By Matt Watkins/Amarillo Globe-News on May 09, 2017 state news
Share
Print 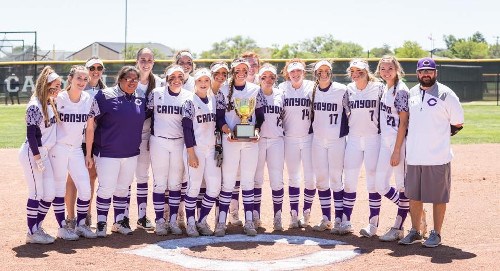 The Canyon (Texas) High School softball team set a national record with its 72nd home run on May 6.

The Canyon Lady Eagles set the new national record (pending state association approval) for team home runs while getting a no-hit effort from ace Kyra Lair en route to a 10-0 Class 5A area round one-game playoff win against El Paso Parkland. The Lady Eagles (29-3 overall) didn’t waste any time getting the record. It came in the bottom of the second when Candain Callahan hit the historic 72nd team home run with a grand slam to left-center that cleared the wall by three feet to give Canyon a 5-0 lead early.

“I saw the pitch coming on the outside and just reached out and swung as hard as I could,” said Callahan, whose homer was her 11th on the year. “I’m going to give everything to my team. I hit the home run but we all got us to the national record.”

The 72nd second homer by Canyon breaks the previous mark held by Pisgah High in Alabama from 2011.