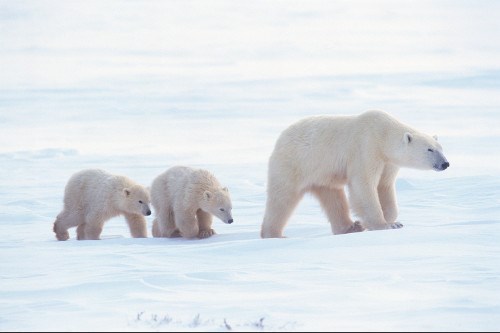 Sure, it can be a picturesque scene when a curious deer is beyond the fence of a football game or amusing when a sly fox inches closer to the concession stand, lured by the aroma of hot dogs. But for the most part, things become problematic.

Consider these incidents that have occurred across the nation:

• A mama polar bear takes an early-morning stroll with two of her cubs in Barrow, Alaska, a town located 300 miles north of the Arctic Circle. Along the way, they decide to take a nap at the 40-yard line of the high school’s football field. Perhaps she can be pardoned, though. The turf field is a lush blue, is adjacent to the Chukchi Sea and must have resembled her natural habitat. Fans arriving early to the football game that
morning did a double-take and then had to wait it out until the trio decided they’d had enough rest. Pregame warmups were delayed as well as the kickoff.

• About 3,000 miles to the southwest in Arizona, coyotes and snakes often line cross country courses, forcing runners to sidestep, evade or, yes, even scream their way past the unexpected onlookers to elude any danger.

• In Florida, alligators are common members of the gallery when they get an up-close look at a golf ball that has just landed on a green. Florida gators aren’t just partial to golf, though. One made an appearance at a cross country meet in Lake City, and they linger at other outdoor high school events, too.

• To the north, Minnesota, nicknamed the “Land of 10,000 Lakes” could go by another moniker: “Land of 10,000 Droppings.” This happens with the spring migration of Canadian Geese when the birds leave their calling card on baseball fields, softball fields, lacrosse fields, and track and field venues.

• And finally, fans in Kansas have witnessed a cattle stampede during a football game, a rush triggered when a cannon sounds a voluminous salute after a touchdown is scored.

“I know some of the stuff must sound pretty funny, but there are some risks here when you are dealing with wildlife at our events,” said Bob Madison, an associate director with the Minnesota State High School League. “On our pre-game or pre-meet checklists, we have a line item now that covers the safety of the fields in the wake of wildlife and what to do if we have an incident of wildlife during a contest.”

As an activities administrator at Mounds View High School, a northern suburb of Minneapolis and St. Paul, Madison was witness to the lighter side of dealing with wildlife. When his school was dedicating its new turf field, a flock of geese circled and started their descent toward the surface. When the geese realized it wasn’t a grassy field, they pulled up suddenly just short of the turf. Perhaps in anger, they left a whitewash spray on the school board dignitaries and other administrators who had assembled for the field’s unveiling.

A handful of years ago, just down the road from Mounds View, Irondale High School had its own conundrum. An osprey, protected under the Migratory Bird Treaty, had built a nest atop one of the stadium lights high above the field. While an osprey nest can be removed without a permit if the nest is inactive, that wasn’t the case here.

The stadium was shut down until it was determined it was safe – and legal – to remove the nest. When it was eventually removed, a lanyard attached to a set of keys that belonged to an Irondale coach was found in the nest.

In Kansas, during a football game in the late 1990s, cattle were being herded down a street in town to their pens when a cannon went off after a touchdown at a nearby high school, startling the cattle and triggering a stampede.

“It was a mess,” Sersland said. “We had to suspend the game for a while. We had worked so hard to prepare for the game, but you don’t anticipate a cattle stampede is going to disrupt things. After we restored order, the white hat (head official) wouldn’t re-start the game. When we asked why, he pointed at all of the cow pies on the field. We had to drag out all of the shovels and get to work again. After that, we were much more aware of the potential of what could happen with the cattle.”

Alaska, understandably, deals with wildlife more often than other states.

In 2014, the Region 5 girls cross country running meet was held in Ketchikan in late September, a time when bears are gorging themselves prior to hibernation. A runner from Thorne Bay was dominating the race when she saw a bear approaching the course. She yelled back to the rest of the field warning them about the bear and continued with the race. The bear moved onto the trail and prevented the rest of the runners from continuing. The race came to a halt. The race was rerun without the winner from Thorne Bay with the stipulation that if anyone had bettered her time a new champion would be declared.

The Thorne Bay runner, who took third the following week at Alaska’s state meet, told the media, “she does not run as fast as when a bear is after her.”

In another tale from Alaska, the Region 4 cross country running meet is occasionally held at Kincaid Park in Anchorage. The park is located near the Cook Inlet, and many species of Alaskan wildlife roam free within the park. In preparations for the event, meet management pay close attention to the “Moose Patrol” officials. These officials are on the course and communicate via radio to keep the large wildlife off the trail. They use noise makers and their imaginations to drive the animals off the trails.

In 2015, one of the officials was unable to drive a bull moose away from the trail. Administrators had to shorten the 5,000-meter course to about 4,300 meters.

“The meet management and coaches were glad he made the quick decision,” said Rus Schreckenghost, an associate director with the Alaska School Activities Association who oversees officials.

“In game management, dealing with wildlife is a little bit like dealing with the weather,” Madison said. “You prepare for the unpredictable.”

Tim Leighton is communications coordinator of the Minnesota State High School League and a member of the High School Today Publications Committee.