On January 15, 2021, ballots from a record 39 states, the National Speech and Debate Association, the National Catholic Forensic League, National Association for Urban Debate Leagues and the Nation Debate Coaches Association were received and tabulated for the 2021-2022 national high school policy debate topic. Water Resources was selected over Russia by 1 vote, garnering 51% of the vote.

In late December and early January the five topic areas were narrowed to two as part of a two-stage balloting process. Use of the second ballot assures a majority of coaches across the nation favor the chosen topic area and resolution.

The 2021 Policy Debate Topic Selection Meeting will be held in Kansas City on July 30th through August 1st, 2021. Specific information regarding lodging, travel arrangements and daily schedules will be sent to your office at a later date. You may also check our Web site at: https://www.nfhs.org/sports-resource-content/nfhs-policy-debate-topic-selection-meeting/. 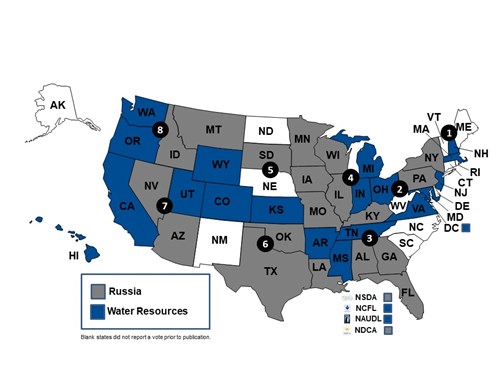 Resolved: The United States federal government should substantially increase its diplomatic engagement with the Russian Federation regarding one or more of the following: arms control, the Arctic, cybersecurity, human rights.

See how we got to 2 topics