These words best describe this era of COVID-19. The coronavirus struck fear in many American cities by March 2020, and a worldwide pandemic ensued. As cases and deaths in the United States steadily climbed, a nationwide shutdown soon followed, disrupting education systems across the country. Not only were classrooms disrupted, but also the many extracurricular events we so closely associate with a normal high school experience: no spring sports, no prom, no graduation ceremony, no summer leagues, no camps and no homecoming.

It was no wonder that, by mid-summer, we were reading reports about the harmful effects the pandemic was having on the mental health of U.S. youths. The effects were apparent to teachers, parents and coaches. Although the mortality of COVID-19 was minimal in school-aged children, the virus was not without significant harm to their well-being.

My son began his senior year in the midst of the pandemic. Together, we would ride the roller coaster of emotions brought on by the silent enemy – from hope to despair to cautious optimism as the Wisconsin high school fall sports season approached. Disruptive as it may have been, there were bright silver linings to the time together with my son, a Wisconsin high school senior athlete, in the midst of the dark cloudy times of the COVID-19 pandemic.

My son entered the summer as the top quarterback on the team’s depth chart. When the previous season ended, he set two major off-season goals: get significantly stronger and throw a better ball. By early 2020, his investment in the weight room was paying off, but by late spring, weight room access was closed. Initially discouraged, he found creative ways to continue to lift during the shutdown. Not just one of the highlights of this COVID period, but one of the highlights of my life was being a part of his efforts to throw a better ball. Since gatherings of kids were heavily discouraged, my son turned to me for help.

“Can we throw the ball together, Dad?” he asked me.

I am an overweight, balding, middle-aged man who no one would confuse as an elite athlete. In my soul, however, I am still a football player. This invitation was music to my ears. In the midst of a worldwide pandemic, my son and I thus began what became a 45-minute nightly ritual in our yard for four months – throwing the football. I would locate myself at the point of every anticipated receiver target in his offense. He would work incessantly on footwork, making his drops, focusing on his release point and follow-through. Thousands of throws were made in the heart of the pandemic.

We would talk throughout the experience. It was not just chalk talk, or corrective talk. It was real talk between father and son; the sort of talking that every dad reflectively wishes he had with his teenage son, but rarely gets the opportunity to have. We discussed hopes and expectations for the season ahead, fears of what could happen despite all the preparation, coping mechanisms with all the experiences that were cancelled, leadership essentials, teammates, girlfriend, alcohol, smart decisions, college and life.

As the football season neared, there was great uncertainty. The virus was surging in Wisconsin. The season was in doubt. Coaches were apprehensive. The Wisconsin Interscholastic Athletic Association (WIAA) pushed back the start of the season by a month. What did that mean? Would it happen at all? While the players were downtrodden by the news of a delayed start, the coaches remained positive since the slim hope of a fall season was still alive.

Although a spring option was gaining traction in the hopes of calmer times, we all feared it was likely to be just as uncertain in the spring, too. We began paying attention to the daily COVID counts and trends, hoping for a sustained downturn, which never happened. Intensive virus mitigation plans were needed for the season to survive.

Our team was fortunate to have a head coach who embraced mitigation strategies, and he worked closely with our public health officials weekly. I don’t know how many teams were doing it right or wrong, but I was glad to know at least our leadership was doing it right. Masked practices and games, distanced outdoor dressing, strict temperature and symptom screening, and more sanitizer than I remember ever before seeing all contributed to an eventual abridged 2020 football season.

We were one of only a few schools in the state to play at least eight games in the fall. Players were reminded weekly of all the area teams dropping out from the virus. I believe our team’s mitigation strategies were a huge part of our lack of need for COVID-related shutdown. I also think it was the commitment of the players, to not only follow masking and aggravating, practice-related safety measures, but also through their social sacrifices. They avoided the usual team social events and their fun post-game gatherings with schoolmates at local restaurants, just in case someone there had the virus. To play, each realized he had to give up a chunk of what made a school kid’s life fun.

This season resulted in several very special team memories. In week 2, as an underdog, the team methodically fought back from a 21-point second-half deficit to tie the game and eventually win in double overtime, 50-49. It was one of the grittiest and most exciting wins in program history.

In week 7, in a back-and-forth slugfest against a team we highly respect that would eventually finish second in the state’s final divisional rankings and that had decisively knocked us out of the playoffs in every preceding head-to-head meeting, we played our very best. In this game, we converted on seventh fourth-down plays to keep the chains moving, we executed every aspect of the game plan, and we eventually won the game, 30-29. My son threw the ball marvelously throughout the game, and I suspect this capstone performance helped solidify his subsequent all-conference selection. I was very proud of him, because I knew the work that went into those throws.

My favorite part of the entire game was not the touchdown passes or big runs or fourth-and-long passing conversions. My favorite part was the joy and excitement I could see in the leaps and hoots and pumping arms of my son and his teammates after the clock struck zero. Was all of the masking, temperature checks and safety protocols worth it? In this team’s experiences, it allowed some very special moments that will last a lifetime in the memories of all who took part.

There are lessons from this season that apply to life. Sacrifice is often necessary to reach goals. Commitment by the whole team leads to better outcomes than commitment by only a few. We each can only control what we can control. None of us knows what tomorrow will bring, so we each must actively prepare to do our job and let the rest come what may. Even when times seem darkest, there will always be bright spots to find.

I was asked over Thanksgiving to state a reason why I am thankful. I am thankful to the WIAA for working hard to provide these athletes the opportunities to experience football in the 2020 season. When so much had been taken away, for nine weeks in the fall at least, we felt a little bit normal again. As for me, I will always cherish the time spent during this pandemic catching it from my son. Every dad should be so lucky.

Dr Erik Stratman is chairman of the Department of Dermatology for the Marshfield Clinic Health System in Marshfield, Wisconsin. He has been an assistant coach for seven years for the Spencer-Columbus co-op varsity football team, a Division 5 program from Spencer High School in Spencer, Wisconsin. 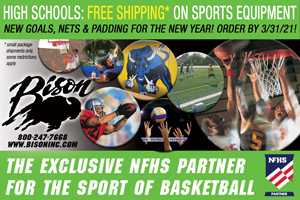