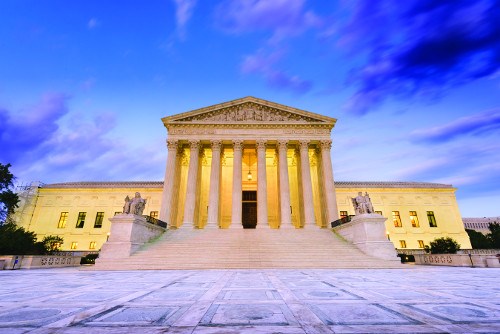 On March 6, 2017, the Supreme Court announced that it was sending the case of G.G. v. Gloucester County School Board, an appeal of the April 2016 decision by the Fourth Circuit Court of Appeals granting access to school facilities based on a student’s gender identity rather than gender-at-birth, back to the Court of Appeals for reconsideration in light of the February 22, 2017, recission by the new presidential administration’s Departments of Education and Justice of a Title IX guidance issued on May 13, 2016, clarifying protections for transgender students.

The case, which had been scheduled for oral arguments before the high court on March 28, 2017, and for which a ruling had been expected to be rendered in June of 2017, might have established some bright-line legal standards regarding the obligations of schools and athletics programs to transgender students – including sports participation rights and facilities-access issues regarding locker rooms, shower rooms and restrooms – guidance sorely needed by state legislatures, school boards and state associations nationwide because of the existing patchwork of confusing and often-conflicting statutes and regulations at the local level on the issue.

U.S. Supreme Court rulings establish a nationwide precedent that provide uniformity of the law on an issue and, as such, are one of the most valuable tools for proactive compliance by individuals and organizations – including schools, athletics programs and athletics personnel – with their legal obligations. Many observers on both sides of the transgender rights question were disappointed to see the Supreme Court “punt” on the Gloucester County case because of the missed opportunity for establishment of an unambiguous legal standard on the issue.

The Supreme Court, in a dispute involving the question whether a prayer delivered over a stadium public-address system before a public high school football game violates the First Amendment’s Establishment Clause, held that prayers delivered “on school property, at school-sponsored events, over the school’s public-address system, by a speaker representing the student body, under the supervision of school faculty, and pursuant to a school policy that explicitly and implicitly encourages public prayer” constitute prohibited government-sponsored religious messages.

It is important to note that the Court acknowledged in the case that the Establishment Clause does not prohibit students from praying at any time they choose on school property; rather the prohibition is on government-involvement through school sponsorship of the activity or school employee (government employee) involvement in the prayer. Therefore, individual students or teams spontaneously deciding to take a knee for a pre-game prayer in a locker room or forming a prayer circle on the field or court is permissible – only the involvement of the government or a government employee is prohibited.

In a dispute involving a football player who was denied the opportunity to participate in interscholastic athletics when he refused to participate in his school’s drug-testing program, the Supreme Court upheld the constitutionality of the district’s random drugtesting program for student-athletes, ruling that although the tests constituted a Fourth Amendment search, they were reasonable given the school’s interest in combatting the problem of teen drug use, they were no more intrusive than many of the other requirements imposed upon athletes (medical exams, medical histories, constant monitoring by athletic trainers and dressing in locker rooms), and the sanctions for failing a drug test involved non-punitive, rehabilitation-oriented measures. Seven years later, in Board of Education of Pottawatomie County v. Earls (2002), the Court would extend the rationale by upholding the constitutionality of such drug-testing programs for all students participating in extracurricular activities.

The case involved the application of the Americans with Disabilities Act (ADA) to sports activities, in particular to the use of a golf cart in the PGA’s Qualifying School and its tournaments by a golfer suffering from a degenerative leg disease that impaired his ability to walk. The Supreme Court ruled in Martin’s favor, holding that the ADA requires that reasonable accommodations be provided to an athlete with a disability unless the requested modification would “fundamentally alter the nature of the sport.” The Court noted that the PGA’s stated reason for requiring golfers to walk the course was to “inject the element of fatigue into the skill of shot-making,” but that the PGA’s own doctors agreed that Martin’s leg condition was so severe that he was already more fatigued on the first hole of a tournament than other golfers would be by the final hole of competition, thus negating any argument that allowing Martin to use a cart would fundamentally alter the nature of the sport. The case is instructive for high school athletics programs facing a request for accommodation by a student-athlete with a disability – the school must evaluate whether granting the request will truly alter the inherent character of the sporting activity.

In a case that twice reached the Supreme Court involving sanctionsimposed by the Tennessee Secondary School Athletic Association on a member private school for violations of the organization’s anti-recruiting rules, the Court initially found in 2001 that the TSSAA was a “state actor” – a quasi-governmental entity – that was obligated under the Bill of Rights to respect the constitutional liberties of its member schools. In 2007, addressing the argument by the private school that its recruiting efforts constituted enrollment management strategies protected by the First Amendment’s free speech guarantees, the Court held that the TSSAA’s anti-recruiting rules did not infringe on the free speech rights of member schools, because those schools were voluntary constituents of the organization and had agreed as a condition of membership to abide by all association rules. The ruling inspired a figurative sigh of relief by all of the state associations nationwide by affirming the authority of those organizations to enforce their rules, in most cases which were regulations that the member schools themselves had voted in favor of enacting.

In its landmark case addressing student free speech rights, a dispute that began with students wearing black armbands to school to protest the Vietnam War, the Supreme Court stated that students do not “shed their constitutional right to freedom of speech or expression at the schoolhouse gate” and that schools have authority to limit student speech only when it would “materially and substantially interfere with the requirements of appropriate discipline in the operation of the school,” a standard that did not apply to the passive and non-disruptive actions of the students wearing the armbands. School authority over student speech was later extended by the Court in Bethel School District v. Fraser (1986) to on-campus use of vulgar and lewd language, in Hazelwood School District v. Kuhlmeier (1988) to curricular speech such as a school newspaper, and in Morse v. Frederick (2007) to advocacy of violation of a school anti-drug policy. These four landmark student speech cases established the legal standards applicable today to resolve judicial challenges to sanctions imposed on students and student-athletes for inappropriate postings on social media sites, for petitions advocating for the firing of a coach, for speech harassing or bullying classmates or teammates, for communications constituting a threat of harm to the school community, or for political advocacy such as national anthem protests at interscholastic sports contests.

In a case involving the constitutionality of the search by school administrators of a student’s purse that yielded drugs, drug paraphernalia and evidence of drug sales that would lead to her criminal conviction and expulsion from school, the Supreme Court ruled that students in K-12 settings are not entitled to the same level of Fourth Amendment search and seizure protection as individuals in non-school settings and that the search of the student’s purse was constitutional because school officials had a “reasonable suspicion” she was in violation of school policies – something more than a hunch, but less than the “probable cause” required for a search in other settings. The TLO “reasonable suspicion” legal standard has been used by numerous lower courts to justify sanctions imposed on a student or student-athlete based on evidence gathered from the search of a purse, backpack, book bag, gym bag, coat, pockets, and in some circumstances, the contents of a cell phone (although the application of TLO to cell phone searches is not presently an entirely settled legal issue).

In a case in which a high school student was subjected to sexual harassment by her economics teacher who was also a football coach, including sexually explicit language, forced kissing and coercive intercourse on school property, the Supreme Court ruled that victims may sue a school for monetary damages under Title IX, the federal law best known for its application to equity in athletics programs, but which at its core is a broad-based, anti-gender discrimination statute. Prior to the case, Title IX had been interpreted to provide only the remedy of injunctions mandating that schools take corrective actions regarding discrimination; Gwinnett made it clear that victims of Title IX violations could also seek money damages, thus increasing the pressure on schools and athletics programs to ensure compliance with all aspects of the federal law.

In another peer sexual harassment case, the Supreme Court ruled that the victim – in addition to seeking money damages from the school and school officials based on their violation of Title IX – may also seek money damages for violations of their rights under the Equal Protection Clause of the Fourteenth Amendment using a federal law, titled 42 U.S.C. Section 1983, that provides for civil damages against institutions and institutional representatives. The case provides another avenue of recourse for victims, illustrating the necessity for schools and athletics programs, especially in an era of increasing numbers of sexual harassment and sexual violence claims, to develop and implement legally viable policies addressing the issue.

The case addressed the issue whether a school voucher program offering parents the option to send their children to a private school, such as the program administered by the state of Ohio for students in the Cleveland School District, violated the Establishment Clause of the First Amendment because the majority of participating private schools for which the vouchers could be used were affiliated to a religious group. The Supreme Court ruled voucher programs do not violate the Establishment Clause when, like the Ohio program, they have secular goals and neither encourage nor require those using the vouchers to attend religious schools. The decision resulted in subsequent years in a dramatic increase in the number of voucher programs across the country, creating a separate set of issues regarding the use of such vouchers to
enable student-athletes to jump from public schools to private institutions and for, in some cases, private institutions to indirectly recruit players or stockpile the rosters of entire AAU teams, thus creating challenges for state associations regarding the enactment of transfer and residency rules that effectively address the issue of school-jumping solely for athletics reasons.

Lee Green is an attorney and Professor Emeritus at Baker University in Baldwin City, Kansas, where for 30 years he taught courses in sports law, business law and constitutional law. He is a member of the High School Today Publications Committee.