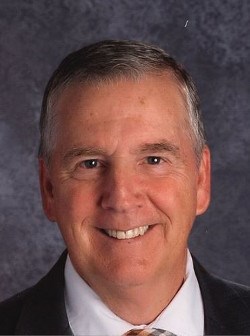 The Board of Control of the Iowa High School Athletic Association has selected Tom Keating to serve as its next executive director, starting July 1, 2019.

“We’re thrilled to welcome Tom Keating to the IHSAA family,” Board of Control chairperson and Humboldt superintendent Greg Darling said. “The board went through an extensive hiring process with a national search, surveys to schools and staff, and rigorous interviews.

“Tom has taken a championship work ethic from his coaching career and combined that with invaluable knowledge as an educator and administrator. His exceptional core beliefs align with our vision of the IHSAA.”

A native of Philadelphia, Pennsylvania, Keating began his career as a teacher and coach at Maxwell High School in 1977 before starting an award-winning run as a teacher, coach, and activities director at Wahlert, Dubuque in 1980. Wahlert won 11 state volleyball championships with Keating as head coach, and he was named NFHS National Coach of the Year for volleyball in 2003.

He moved to Xavier as principal in 2004 and was named the National Catholic Educational Association’s Educator of the Year in 2010. Keating became president at Xavier in 2018.

“I am excited to join the IHSAA as its next executive director,” Keating said. “The IHSAA’s long-standing tradition of serving its member schools in support of education-based activities is recognized locally and nationally. Working with an outstanding staff and board, as well as dedicated administrators and coaches across the state, it will be my goal to enhance the already outstanding programs offered at the IHSAA.”

A longtime advisory committee member for the Iowa Girls High School Athletic Union, Keating served on the IHSAA’s Board of Control from 2008-18 and was chairperson in 2014-15.

Keating was a 2003 inductee to the National High School Athletic Coaches Association’s Hall of Fame. He has been an adjunct instructor and authored five graduate-level courses for Drake University.

“I look forward to working with the IGHSAU, IHSMA, IHSSA, Iowa Hall of Pride, the Department of Education, and our state legislators to continue to find ways to positively impact young people in our state,” Keating said.