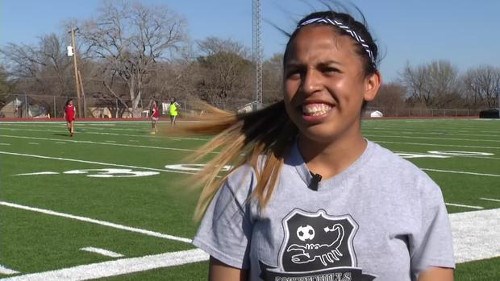 In Texas, Esmie Gonzalez is racing to new goal-scoring heights for girls soccer. Gonzalez, of Forth Worth South Hills High School, set a new record for goals in a career with a nine-goal outburst in a game last week. That game put Gonzalez's career total at 294 goals, eclipsing the previous record of 286 of Erin Martin from 1992.

Gonzalez entered the season with 207 goals, good for 12th on the all-time list, and she hasn't stopped scoring during her senior season. She is well on her way to becoming the first girl to pass 300 career goals. She now has the season goals record of 107 in her sights.

"Oh yeah, when I get my chance, I'm gone like, 'whoosh,' going out," she told NBCDFW.com. She also praised her teammates. "My teammates, I love them," she said. "They're the ones that help me, and they even know that it's a big accomplishment for me. But I couldn't do it without them."