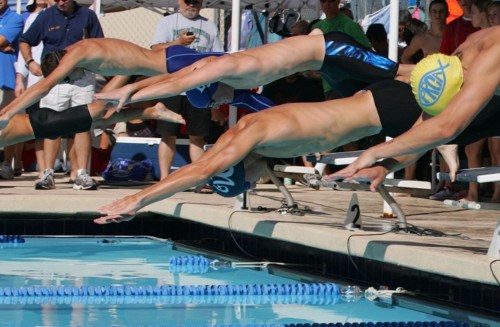 Among the changes to high school swimming and diving rules for 2017-18 are ones that address risk minimization and requirements for use of the championship meet format.

The National Federation of State High School Associations (NFHS) Swimming and Diving Rules Committee recommended seven rules changes at its March 19-21 meeting in Indianapolis, and all changes were subsequently approved by the NFHS Board of Directors.

Rule 1-3-12 now requires state associations to identify culminating meets, which require use of the championship format. Due to the variations in conference, league and postseason championships within states, the committee believes it is appropriate for the respective state association to determine which meets shall be considered culminating meets.

“The championship meet format features preliminaries and finals rounds, which are thought to provide athletes the best opportunity to excel in their events,” said Sandy Searcy, NFHS director of sports and liaison to the Swimming and Diving Rules Committee. “However, the format also prescribes specific rules associated with team and individual entries, dual confirmation, declared false starts and applicable penalties for violation of these rules.

Rule 3-6 was reorganized to provide clarity regarding the potential conduct issues within a meet. As a result, the committee believes these issues are now easier to compare and categorize for appropriate action and/or penalty. Rule 4-1-8 was also affected by this rule change and now includes language regarding appropriate conduct for meet officials.

Other rules changes include:

“The Swimming and Diving Rules Committee was intentional in deliberation of this year’s rules proposals,” Searcy said. “Its main focus this year was to minimize risk but also clarify existing rules.”

Swimming and diving ranks ninth in popularity among girls with 166,747 participants and 10th among boys with 133,470 participants, according to the 2015-16 NFHS Athletics Participation Survey.

Bryce Woodall is an intern in the publications/communications department at the NFHS. He is a senior at Franklin (Indiana) College studying public relations.