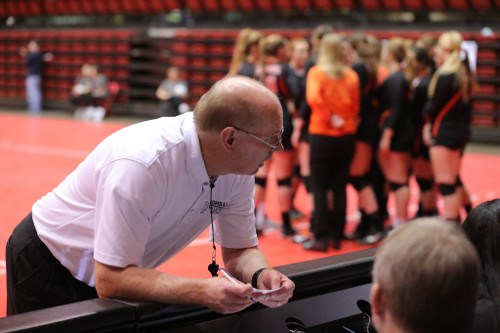 Gather together a group of officials. Throw in some pizza and perhaps an adult beverage and the stories begin to flow. They will tell about their crew, the coaches, personal challenge, the big game, tournament assignments, family and more. The social aspect of officiating is of great value and what keeps many officials involved for decades.

Put a group of officials together and ask them some specific questions about their experiences and you can find more common opinions than you would expect. What is it that bothers officials the most about their season? What is it they want from schools, fans, players? What may drive them away from officiating?

A recent weeknight roundtable featured officials with experience in three states, but the vast majority was all in Indiana. Included in the discussion were veterans in baseball, basketball, football, softball, volleyball and track. There were too many years of experience to total and there were multiple state championship rings at that meal. I produced a list of questions and they knew immediately I was working on another story. My officiating friends have become accustomed to me using them for story ideas and information. I promised to keep their identities hidden to avoid any backlash from schools or the state association. While many of us don’t like anonymous quotes, too many events in the immediate past have demonstrated that paybacks are common.

A nearly universal pet peeve of the group is how little schools invest in hosting officials. “When was the last time we had a working shower after a football game?,” asked one. Years ago, towels, a cold drink, a candy bar and maybe a sandwich were the rule. Now, they are an exception. One official reported that when he asked about a towel to shower at one school the athletic director replied, “I’m paying you $80 a game. I’m not your laundry service.”

Baseball and softball officials still find themselves changing in their cars in the parking lot because schools don’t have dressing rooms near the diamonds or all rooms are full of athletes. “The issue with that is when an official is reported to the school for pulling their pants down in the parking lot,” added one multisport veteran. Others worried about a cellphone image of them changing appearing in social media.

The discussion evolved into discussion about better trained assistant officials. From the scorer and timer at the table to the chain gang on the sidelines, many officials noted the quality is dropping. “It used to be you would see the same table officials year after year at schools and they were dedicated to doing their jobs and supporting the contest. Too often now, it appears that parents or faculty are ‘forced’ to serve one game as a table official and they don’t care how it should be done. It can create issues,” said another official.

Sometimes the coach or athletic director are asking for a volunteer from the crowd just minutes before a game to help in a position. That is especially true in volleyball and sub-varsity football, but varsity contests are not exempt.

The officials discussed field and court conditions, uniform issues and travel distances as items that created concern for them and their partners. Because this was a veteran group, they often discussed how it was better years ago. Many of the officials thought the lack of turnover among coaches and athletic directors in the old days made for better conditions for the players. Today, between the turnover and budget issues, there is rarely a contest that some piece of equipment isn’t a part of the officials discussion. “I sometimes talk to the athletic director about improving the field or changing the equipment and their response is, ‘I won’t be here that long,” said one five-sport official.

The number of officials is declining. The challenges for schools to find coaches and athletic volunteers are growing. It appears to be an issue with society and getting people to be involved or committed. Many recent news reports have talked about the declining number of officials and seem to place the blame on sportsmanship. With this group that was way down the list of issues they face.

“Sure, the fans are more obnoxious and the players don’t seem to respect adults like the used too, but overall I just ignore that stuff,” said one female official. It was a sentiment echoed by several at the table. Officials understand that passion, anger and frustration are part of the game. It always has been. It just hasn’t become the reason to drive these officials away. Most of them acknowledge it may be scaring off some new officials because of the media coverage.

The consensus of the group agreed that a warm welcome to the school, a clean and dry area to dress and prepare, a bottle of water and a candy bar, a towel for a warm, clean shower in a facility that is properly prepared for the game is what they need to feel wanted and appreciated. Beyond that, good sportsmanship, a sandwich and an escort to their cars is considered extraordinary.

Perhaps state associations should become more interested in listening to the “small” pet peeves of the officials and work with the schools to address them. This could be an important step in retaining officials and encouraging them to bring their friends into the officiating world. Focusing on the big things can often lead to ignoring the small things which are the real issues.