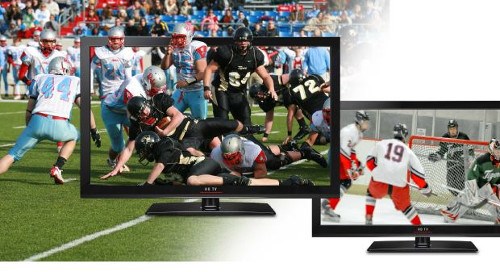 It is a common scene during professional and collegiate games when various stoppages in play require an official review via instant replay. At the high school level, it is far less common, but that is changing slightly entering the 2018 high school football season.

At least three state associations have joined the Minnesota State High School League (MSHSL) in the implementation of instant replay video during the football season. The MSHSL, the first state association in the country to use instant replay video review during its ice hockey, basketball and football events, is entering the second year of a hopeful three-year experiment in football approved by the National Federation of State High School Associations (NFHS).

“We are really looking forward to another year of growth in using video to review certain situations,” said Jason Nickleby, MSHSL coordinator of officials. “From our standpoint, the feedback from coaches, officials and all that were involved, is very positive. They want it to continue. The biggest thing about replay isn’t necessarily to correct things. Through the review, it also showed how good our officials are.”

Football replay in Minnesota is used only in the semifinals and seven Prep Bowl Championship Games. It is used to review every scoring play, turnovers and specific situations in the final two minutes of a half that affect the clock, whether a player is inbounds or if a pass is completed.

In a span of 21 games during the semifinals and championship games at U.S. Bank Stadium in downtown Minneapolis, Nickleby said 120 plays were reviewed. Of those reviews, only 17 resulted in game stoppages, and just four resulted in reversals. Five cameras were used, and trained, veteran football officials were used in the replay booth. Most reviews took 20 to 30 seconds.

“For the most part, our officials were getting plays right in real time,” Nickleby said. “That’s really pleasing to see.”

“I don’t think any other state association can say that,” Nickleby said.

The NFHS Football Rules Committee has considered requests from state associations to experiment with replay in recent years. The committee also continues to gather important data on the feasibility of mandating the implementation of replay at the high school level.

“The Football Rules Committee wants to take it slow right now,” said Bob Colgate, NFHS director of sports and sports medicine and editor of the NFHS Football Rules Book. “(The committee) wants to make sure the data received from experiments is pretty good. We want to see different experiments (from the state associations) and get feedback before making any decision.”

During its experiment, the MSHSL must receive approval annually from the NFHS. Bob Madison, MSHSL associate director who oversees football, attributes the success of replay to keeping the process simple.

“We view it as more than just a game rule,” he said. “It’s an administrative opportunity to get calls right.”

In hockey, basketball and football where the MSHSL plays in premier venues, video replay is only used where video capabilities and a television presence allow.

“Technology is the key component, and I believe we have the best television relationship in the nation,” Madison said. “Without the technology and the multiple camera angles, you can’t do it.”

In football and hockey, a replay official determines whether or play or decision is reviewed. In the MSHSL’s basketball semifinals and championship games, only the game’s referees decided which plays to review. In basketball, reviews are used to prevent or rectify a clock error, to determine if a field-goal attempt was made with time on the clock, and to determine if a successful field goal was a two- or three-point attempt. Nine other states use video replay in their basketball state tournament events.

Madison said football is more complicated when implementing video review. A video replay official charts every play and determines if a replay is necessary, but only on a change of possession and scoring plays.

The NJSIAA plans to use video review with Hudl video technology on the sideline.

“The technology is available, so why not try it,” NJSIAA Assistant Director Jack DuBois told the Washington Post. “This was actually generated from some coaches and officials who said the time is now to try to implement it and prevent some wrong calls.”

“You never want to rule anything out,” GHSA Executive Director Robin Hines told the Atlanta Journal-Constitution. “The technology exists, and it would be shortsighted not to consider it.”

Allan Smith, president and executive director of the Georgia Athletic Officials Association, told the Atlanta Journal-Constitution: “I would always want to use every means available to get the call right.”

Nickleby said learning will continue during the second year of football video review.

“I think the game of football has so many ways that the ball can bounce,” he said. “You can watch football every day in your life and still see something you haven’t seen before. Replay is always evolving. This is high school football. We are trying to make it a great experience for kids, officials and fans. We will just keep evaluating.”