Should Female Lacrosse Players be Required to Wear Helmets Like Males? 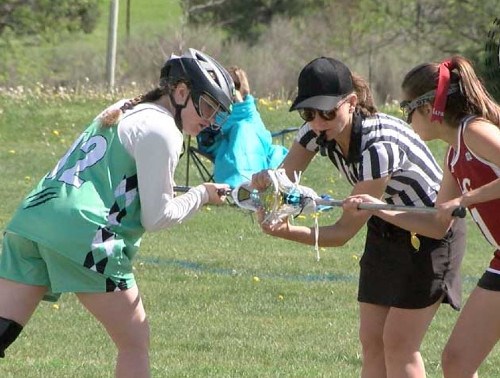 With the end of the year approaching, several high school sports leagues are gearing up for state championships this week, including men’s and women’s lacrosse.

In recent years, women’s lacrosse leagues have faced the question of whether they should make helmets a requirement.

The topic is contentious; some coaches and players believe helmets can help prevent concussions while others are adamantly opposed.

The rules of women’s lacrosse

There are no rules in the state of Colorado that require female lacrosse players to wear a helmet. Instead, the Colorado Girls Lacrosse Association mandates that player must wear eyewear and mouthpieces. Helmets are considered optional since women’s lacrosse is considered a semi-contact sport.

Men’s lacrosse, meanwhile, is considered a full-contact sport, so helmets are required.

While the sticks men and women’s lacrosse play with are different, the balls are the same.

“They are also, at the end of the day, playing with a cement ball. It’s covered in rubber, but it is still hard,” said lacrosse athletic trainer Lorin Sezer.

Sezer says the majority of injuries she deals with are either knee injuries or concussions.

Should Female Lacrosse Players be Required to Wear Helmets Like Males?