Hi to all music teacher colleagues. I hope you all had a wonderful restful summer! I recently got back from another trip to New Orleans, where I attended “SatchmoFest 2019”, an annual birthday celebration of the life and legacy of Louis Armstrong. It’s a wonderful festival filled with fun, food, lectures, presentations, and of course SO much great music!

In 2012 Time Magazine published an article entitled “The 20 Most Influential Americans of All-Time”. The list included names one would expect: Washington, Lincoln, Jefferson, Edison, Ford, Einstein, Wright Brothers, Steve Jobs and more. There was only one musician on the list: Louis Armstrong.

Born on August 4th, 1901 (some say July 4th), Louis “Satchmo” Armstrong was a natural musical genius. He was a trumpet player, singer, composer, entertainer, movie, radio, recording and television star, world ambassador, author/writer, and human rights pioneer. His innovations as trumpet player and singer especially in the late 20s and 30s changed and influenced the course of American popular music. His rhythmic conception literally taught the world what swing was. He had seismic effects on all the popular music of the time. Virtually all of the popular music in our country now can be traced to the Armstrong effect.  His influence on the musicians that followed is incalculable. “He is the only figure in Western culture who influenced the music of his time equally as an instrumentalist and as singer” Giddins p.6

Here’s the question though: How many of us are teaching about Louis Armstrong in the music classroom? (Yes, I know, there’s a lot to do in your respective curriculums, and concerts/shows to prep for!) I believe though that we as music teachers all have an obligation to at least try to familiarize our students with the name of Louis Armstrong (you can pronounce it Louis with the “S” as he referred to himself, or Louie, as his wife, musicians, friends, and fans called him. His nicknames “Satchmo” or “Pops” are all good!). His story is one of the most compelling, enriching, and inspiring of any musical figure in history. It’s an “against all odds” story. I know myself as a teacher of band and jazz ensemble; I now am continually striving to pass on the story of Satchmo to my students (in addition to getting them to recognize the difference between F and F#!).

For all of Armstrong’s influence, I believe he is generally short-changed in our music curricula. In my experience including music school in college (and we had a great jazz program too!), his legacy is touched on only briefly, or omitted entirely. My point here is not to make anyone feel guilty, but to spread the word on how valuable and important teaching about Louis is!

1. In a fascinating life story, Louis developed and built his career from beginnings with abject poverty, amidst a crime riddled environment, having had virtually no parent and family support, enduring the racism of the era, and through The Great Depression.

2. Louis was the first great jazz soloist/improviser, and influenced directly or indirectly every player and singer who followed him. He expanded the range and techniques of trumpet playing, and he popularized scat singing.

3. Louis, with his perfect rhythmic sense, timing, and articulation, his own varied and rich influences, sensibilities and through his example, introduced, taught, popularized and brought forth the element of swing to the world of music. If Benny Goodman was “The King of Swing”, then Louis was the “Father” for sure.

4. Louis learned and built his craft via many influences including blues (playing and hearing it), barbershop/vocal quartet singing (harmony!), opera (playing it and hearing it via the popular figures of the day like Caruso and Tetrazzini-New Orleans had a number of opera houses), marching and brass bands inc. parade music (then popular Sousa, and New Orleans brass bands esp. at funerals), and the popular ragtime music such as Scott Joplin.

5. As jazz music’s first real popular entertainer, he became a worldwide ambassador of music and beloved entertainer, through radio, recordings, movies, television and live performances all over the world and by the year 1950, was considered by many to be America’s best known entertainer and musician (“Ambassador Satch”).

6. He may possibly have been the hardest working (“gigging”) musician in history, often playing over 300 performances in a year, along with squeezing in recording sessions, movie appearances and more!

7. And in almost all the above, Louis was the first African American to achieve a level of success in these areas, breaking down barriers and opening doors for all to follow.

I believe a thorough study of Louis Armstrong-his life and music, should be a requirement and prerequisite of any worthy college music school and university. It’s certainly worth a semester long study, and in my opinion even more. Music schools are shortchanging and not preparing their students properly without it.  In elementary through high school, music curriculums should have at least some activity or performance including his music. I obviously feel strongly about it, and to those who disagree I would simply say in a friendly way “do your homework”. The study of Armstrong’s music (and early traditional classic jazz in general) has reinvigorated and informed my own playing and musical interests. I know that you and your students would benefit as well.

There are so many wonderful quotes attesting to the genius and worth of Louis Armstrong, and a few I think are especially profound and appropriate to list:

“The bottom line of any country in the world is what did we contribute to the world...We contributed Louis Armstrong"

-Dizzy Gillespie, when Armstrong passed away in 1971

"...You can't play anything on the horn that Louis hasn't already played...even modern”

A few quick ideas for lessons: 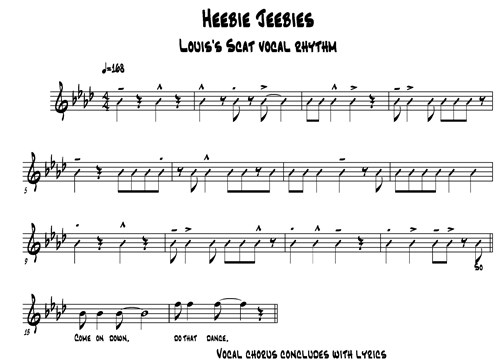 Satchmo: The Genius of Louis Armstrong by Gary Giddins

What A Wonderful World: The Magic of Louis Armstrong’s Later Years by Ricky Riccardi

Who Was Louis Armstrong? by Yona Zeldis McDonough

Travels With Louis by Mick Carlon

If I Only Had A Horn:Young Louis Armstrong by Roxane Orgill

A Horn for Louis:Louis Armstrong-as a kid! by Eric A. Kimmel

There are also books available of Louis’s trumpet solo transcriptions through Amazon, JW Pepper and others.

Ricky Riccardi, the Director of Research Collections at Louis Armstrong House Museum, has an extensive blog: dippermouth.blogspot.com. Ricky is one of the world’s foremost authorities on “all things Armstrong”.

For teachers: Consider visiting New Orleans, experience play the music in the place of Louis’s birth: www.tradjazzcamp.com. I’ve been several times, and it was a wonderful experience.

This article originally appeared in the Fall 2019 issue of CMEA News. Reprinted with permission.