Self-advocacy – Helping Student-athletes Address Issues on Their Own

For young people, staying connected with one another is vital, whether it’s through texts, tweets, vines, snap chats or any other app that allows them to communicate. If communicating with a peer is easy and most of the time enjoyable, why is it so hard for many young adults to communicate, or better yet, advocate on their own behalf when working with adults?

Often a student-athlete who is disappointed by a lack of playing time will avoid a conversation with the coach. Why do the student’s parents demand to meet with the athletic director to discuss playing time, and do so without their son or daughter present for the conversation? Quite simply, many young adults have not had to practice self-advocacy because it has always been done for them.

There may be a little breakthrough in this area, however. The student-athletes who comprise the Athletic Council for Algonquin Regional High School in Northborough, Massachusetts, state that self-advocacy is “one’s ability to support oneself in one’s efforts,” “one’s ability to be assertive and take responsibility” and “to promote oneself.” The tough part for these students is consistently putting these concepts into practice. 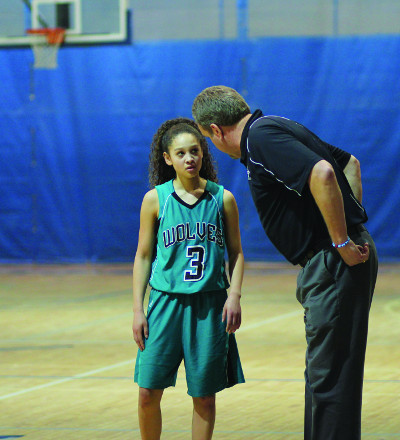 When issues arise for student-athletes, often it is the parent or guardian who emails or makes the phone call to the coach, athletic director or administration. For many parents and guardians, they are only trying to help, but often it has the opposite effect.

“When parents intervene prematurely, this act stifles the students’ ability and willingness to self-advocate,” said Liza Trombley, director of English for Shrewsbury (Massachusetts) High School. “Parents are only trying to help their kids, but it is shortsighted. Forcing kids to advocate for themselves benefits them in the long run,”

Self-advocacy is heavily stressed as part of the educational experience and is reflected in many athletic department philosophies. It is an important part of a student-athlete’s overall experience, according to Jeff Rudzinsky, athletic director at Marlboro High School in New Jersey.

“Part of educational athletics is learning responsibility,” Rudzinsky said. “Whether it is making sure you have your uniform on game day or being able to talk to the coach about what you need to do to get on the field, a major part of that experience is learning to advocate for yourself. Coaches want student-athletes who are independent and who can think and speak for themselves.”

Student-athletes are more than capable of having these discussions and advocating for themselves, they just need to be given the chance – rather seize the opportunity.

Here are some tips for student-athletes:

Recognize That There is an Issue: During the course of a school year, misunderstandings, problems or disputes may arise for student-athletes. Some of these concerns could include not making a team, lack of playing time, not being named a captain, not being named an all-star, not being consulted on the team apparel and many others.

Address the Concern with the Appropriate Person: It is usually helpful to have a sounding board – someone to listen to, or bounce ideas off, whether it is a parent, guardian or a friend. But when it comes to getting an answer, or expressing disappointment, frustration or even anger, the young person needs to go directly to the source.
If a student-athlete wants to know why he or she was not named a captain, the student needs to ask the coach. Complaining to teammates, or parents or guardians may make athletes feel better, but it won’t give them the answer to this question. If they want the answer, then they need to go to the person who can actually explain the process and the decision.

Understand They May Not Like the Answer: The third step for student-athletes is understanding that they may or may not like the answer they get. This also is part of the growth and maturation of young people – another learning experience.
For most young people, talking to an adult is not easy, but it is one of those important life lessons learned through athletics. Developing the skill of self-advocacy (speaking on one’s own behalf) will only help in the future success of these young people. Mom or dad will not be there to talk to their college coach, professor or their boss down the road. Therefore, it is important to empower student-athletes to do it for themselves.

How do athletic directors get this message out to student-athletes and their parents and guardians about the importance of self-advocacy? Put this expectation in black and white, which means spelling it out in the athletic handbook for student-athletes and parents. If your athletic department doesn’t have a handbook, consider developing one.

And be sure to practice what you preach. When you get that phone call “Why didn’t my son make the varsity team?,” you’ll be able to point both the parent and the student-athlete in the right direction. Also, both parties may learn valuable lessons and grow from the experience.

Karrah Ellis, CAA, is the athletic administrator at Algonquin Regional High School in Northborough, Massachusetts. Ellis is a coaches education instructor, as well as Leadership Training Institute instructor with the National Interscholastic Athletic Administrators Association. Ellis was the Athletic Director of the Year for Massachusetts and serves as the second vice president of the state association.