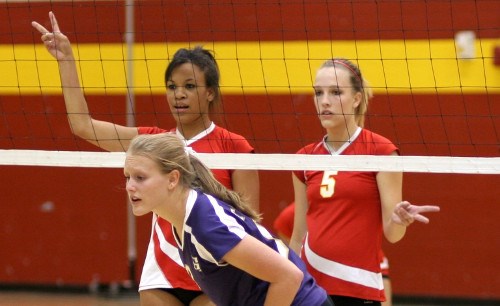 A new penalty and signal related to unnecessary delay and a new procedure for warming up between sets that minimizes risk of injury are among the rules changes for the 2018-19 high school volleyball season.

These revisions were among the rules changes recommended by the National Federation of State High School Associations (NFHS) Volleyball Rules Committee at its January 7-9 meeting in Indianapolis and subsequently approved by the NFHS Board of Directors.

The committee also approved a change in Signal No. 21 regarding unnecessary delay. The new mechanics call for the official to raise the hand on the side of the offending team, beside the head with palm facing the shoulder, and hold the appropriate card on the wrist of the raised hand.

“Previously, the mechanics were awkward and clumsy; this new procedure streamlines the delivery of mechanics,” said Lindsey Atkinson, NFHS director of sports and liaison to the Volleyball Rules Committee. “The new signal is a better way for the teams as well as fans to understand the penalty.”

In its ongoing effort to address risk minimization, the committee approved a new rule, 11-5-3, which states that between sets, teams may warm up in their playing area; however, volleyballs may not be hit over the net.

Two rules changes were approved to clarify revisions made in the rules last year. Regarding last year’s change in the responsibilities and mechanics of the second referee during a time-out, the committee added a note to Rule 5-8-3a stating that “when multiple courts are in use, the second referee may end a time-out or interval between sets with a whistle.”

Atkinson said that while the rule calls for the timer to sound the horn at 60 seconds as the defining end of a time-out, this could be confusing and distracting when multiple courts are being used.

In addition, the committee added an exception to a rule (9-8-2) approved last year stating that once a replay is signaled by the first referee, no requests may be recognized until after the replay. An exception will now be allowed for an injured or ill player. If the injured or ill player cannot continue, Rule 11-4-1b now permits the coach the option of requesting a substitution, completing a legal libero replacement or taking a time-out if the team has time-outs remaining.

The final change approved by the Volleyball Rules Committee was an additional responsibility of the second referee that previously was outlined in the Volleyball Case Book and Officials Manual but not included in the rules book. Item No. 10 was added to Rule 5-5-3b stating that the second referee shall “ensure that the head coach remains in the replacement zone no closer than 6 feet to the sideline, when standing during play.”

A complete listing of the volleyball rules changes will be available on the NFHS website at www.nfhs.org. Click on “Activities & Sports” at the top of the home page and select “Volleyball.”

According to the 2016-17 NFHS High School Athletics Participation Survey, volleyball is the second-most popular sports for girls (trailing track and field) with 444,779 participants in 15,992 schools nationwide. In addition, there are 57,209 boys participating in the sport at 2,400 schools, and 16 states conduct state championships in boys volleyball.