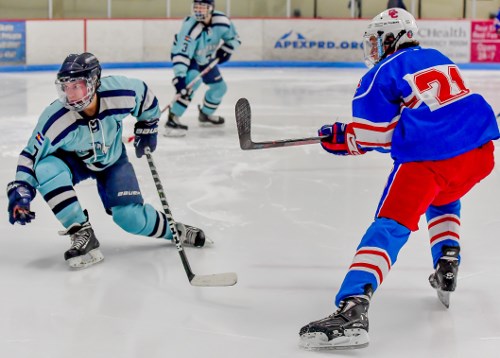 Rules changes related to minimizing risk of injury in high school ice hockey are among five revisions for the 2018-19 season.

The National Federation of State High School Associations (NFHS) Ice Hockey Rules Committee recommended the changes at its April 23-24 meeting in Indianapolis, and all changes were subsequently approved by the NFHS Board of Directors.

Two changes in Rule 3 dealing with equipment were approved to decrease risk of injury in the sport. In Rule 3-3-1, goalkeepers are now required to wear pants or socks under leg pads to cover exposed skin on the legs. In addition, a HECC/ASTM protective full facemask is required. While the full facemask has been required in the past, HECC/ASTM language was added for clarification.

“Goalkeepers have been observed wearing goalie pads without any covering on the back of their legs,” said Dan Schuster, NFHS director of educational services and liaison to the Ice Hockey Rules Committee. “This creates a dangerous situation with skate blades, sticks and pucks that could cause injury to these exposed areas.”

Another risk-minimization change relates to the composition of the stick in Rule 3-1-1. Sticks must be free of any projections and all edges of the stick blade must be beveled. The committee’s intent was to prohibit any stick that could be dangerous to participants.

Another change involves the “captain’s choice of players” for serving a penalty. Additional language was added to Rule 4-2-8 noting that the penalty shall not be charged to the player selected to serve the penalty. The committee agreed that the “captain’s choice of players” penalty should not be penalized personally; therefore, it will not count toward the player’s five penalty allotment, at which time the player receives a game misconduct penalty.

The final change approved by the committee concerns icing the puck in Rule 9-5-3. The revised rule states that when an official errs in calling an “icing-the-puck” infraction, regardless of whether either team is shorthanded, the ensuing faceoff shall take place at the center ice faceoff spot.

“This change eliminates an advantage that the attacking team has previously had with an errant whistle from an official,” Schuster said. “The center ice faceoff does not give an advantage to either team.”

A complete listing of all rules changes is available on the NFHS website at www.nfhs.org. Click on “Activities & Sports” at the top of the home page and select “Ice Hockey.”

More than 35,000 boys participate in ice hockey across the country in 1,610 high schools, and more than 9,500 girls participate in the sport in 622 schools, according to the 2017-18 NFHS Athletics Participation Survey.

Climate Change and Emerging Technologies are the final choices for th.