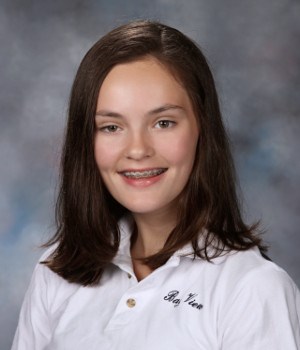 Cecelia Egan of Riverside (Rhode Island) St. Mary Academy-Bay View has been selected the 2018 national recipient of the “National High School Heart of the Arts Award” by the National Federation of State High School Associations (NFHS).

At age five, Egan was diagnosed with Friedrich’s ataxia – a degenerative neuromuscular disorder that limits the individual’s mobility. Although confined to a wheelchair, Egan hasn’t let that prevent her from pursuing participation in theatre.

A freshman at St. Mary Academy-Bay View in Riverside, Rhode Island, Egan first joined The Bay View Players as a sixth-grader. Since that time, she has performed in countless theatrical productions. In many ways, she integrates herself into the cast without calling attention to her need for assisted mobility. Adding to her seamless integration into all aspects of the productions is the tremendous vision exhibited by director Christine Kavanaugh to incorporate her needs on stage.

While at first Egan’s chair seems like an extension of a character she’s playing, she often abandons it in favor of propping herself upon a variety of set pieces, such as a piano, a sleigh or a collection of trunks. To accomplish that, she is assisted by fellow castmates and a voluntary alumna aide. It is physically intensive work, but the focus is never on the equipment. In fact, only when the chair resurfaces later in a performance does the audience begin to appreciate the monumental coordination it takes for Egan to make costume changes, entrances and exits alongside fellow cast members. Egan’s smile, combined with creative choreography, helps to effortlessly integrate her wheelchair into the productions.

A dedicated student, Egan, carries a typical freshman academic load. Although she sometimes travels out of the state for medical appointments, Egan maintains good grades in the classroom.

Egan’s older sister, Emma, preceded her as a member of The Bay View Players. As such, Cecelia knew going in that committing to the program would require more from her than most. For example, even a routine task like completing the rehearsal sign-in sheet requires assistance from her peers.

A few years ago, Egan made the decision to stop working with a provided aide at school. In a self-initiated transition to greater independence, she turned instead to fellow members of The Bay View Players to ask for only the specific help she needed – a choice that both exposed her vulnerabilities and expanded her trusted support circle. A recent St. Mary Academy-Bay View graduate, Michaela Ferreira, stepped in to assist by attending all of Egan’s rehearsals and helping accommodate her needs and stage transitions.

In addition, fellow students attend to her physical needs, help her with hair and make-up, and do whatever is needed to help her feel included and fully involved. In those ways, Egan has been an advocate for expanding artistic and interpersonal access to the performing arts for students with physical disabilities.

Anticipating Egan’s needs has also benefited The Bay View Players, as they are challenged to think beyond personal preparation, and to prioritize cast goals. In that manner, Egan’s personal triumphs are shared by all who were part of her journey to the stage.

Egan’s impact on The Bay View Players ensemble and on loyal audiences has been felt by all. Through her personal courage, she has proven that the stage welcomes anyone with the determination and openness to showcase a love of performing despite physical dependence upon others. Egan’s not camouflaged on stage – she’s showcased in a manner that celebrates her daily victories over her challenges. Her story is an inspiration to those who already know her, as well as to those who have yet to see her in action. Most impressively, she has literally put her “wheels in motion” to make the performing arts more easily accessed and enjoyed by all.

Nominations for this award were generated through NFHS member state associations and reviewed by the NFHS National High School Heart of the Arts Award Selection Committee composed of state association staff members. While the national winner will be recognized June 29 at the NFHS Summer Meeting in Chicago, Illinois, the section winners will be recognized within their respective states and will receive awards before the end of the current school year.

The National High School Heart of the Arts Award was started in 2014. Including this year, five individuals and one band have been chosen national award recipients.

NFHS Summer Meeting to be Held Virtually This Year

Despite Loss of Handshakes, Sportsmanship Will Continue in High Schoo.