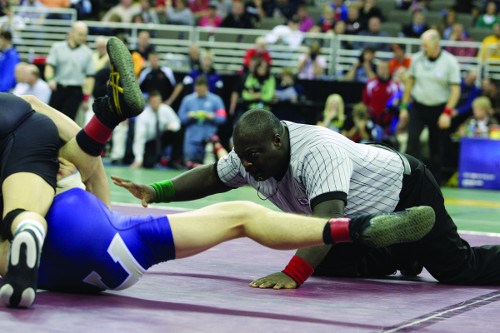 The list of officiating concerns at the high school level continues to rise – from pay-scale concerns, to safety of officials, to acquiring and retaining individuals to officiate high school contests.

In many cases, the issues are complex, and the scenarios are often difficult to resolve as 2016 begins for officiating groups, school districts and state associations.

With regard to proper game fee compensation, many school district budgets don’t allow for flexibility in raises for officials.

“Paying officials their worth will always be an issue,” said Tom Robinson, assistant commissioner of the Colorado High School Activities Association and a member of the National Federation of State High School Associations Football Rules Committee.

“In reality, officiating is a volunteer position with some compensation. The same can be said of coaches, athletic directors and others associated with the education system and education-based activities. It will always be that way.”

Although the issue of compensation remains a significant issue, nothing is higher on the radar for officials than their own personal safety. Several unfortunate incidents this past fall have made the national news, which has highlighted the concern regarding the safety of officials.

“That’s the hottest issue now I guess,” said Don Collins, commissioner of the California Interscholastic Federation – San Francisco Section. Collins said that administrators need to be aware of monitoring the activities site and the standards involved. When standards are breached, there needs to be reinforcement.

Leagues must set guidelines and set a culture that is clear regarding security along with expected behavior from participants and fans. Message bombardment is important.

“If you repeat these messages or at least address them, you give yourself a fighting chance,” Collins said.

Acquiring and retaining reputable officials is also problematic in some areas of the country. Athletic administrators, however, are continuing their efforts to combat the retention issue, and sometimes the most basic fulfilled requests are the most effective.

“I believe a good number of schools could enlighten the sports officiating scene by taking pride in being a great host to officials when they come to their school,” says Roger Barr, director of officials for the Iowa High School Athletic Association. “When officials are well taken care of by a school, that news travels fast among officiating groups.”

Sometimes the simplest gesture – providing a sandwich or a slice of pizza and a soft drink for the ride home to an official by an on-duty administrator – may go a long way in retaining reputable officials for future events.

“The administrator needs to check with them at halftime and between contests,” Barr says. “Someone should accompany the officials to the playing facility and back to the locker room throughout the contest(s). Basically making the officials feel welcome and the mere fact the host school appreciates their efforts.”

In addition, Barr noted that having a student ambassador greet the officials when they arrive and update them regarding the event’s schedule may produce goodwill for the future.

“People go where they are invited and stay when they are welcomed,” said Theresia Wynns, director of sports and officials for the National Federation of State High School Associations.

Wynns has heard plenty of comments from the membership regarding too few officials or states having individuals who are untrained or don’t follow the rules book for officiating.

Other concerns from officials are geographic in nature, such as requests for a travel allowance. Those issues will continue to be discussed this school year and beyond.

“From the school side, one of the major issues is that of mileage payment to officials,” says Dana Pappas, commissioner of officials for the New Mexico Activities Association. “Combine the size of our state (fifth largest in the nation) with the shortage of officials and we have crews traveling over 200 miles one-way to cover contests (at .405 per mile round trip). Between the actual mileage check, meal fees and riders’ fees, it is a large bill for our schools.”

Wynns suggests administrators should be creative in recruiting officials and solicit assistance from those groups or individuals that use the officials.

“I have been told that officials are needed in just about every sport, with the exception of basketball,” Wynns said. “Of course the situation is different for every state. There may be some states that need basketball officials as well.”

In Ohio, as is the case in other states as well, the goal is to seek younger candidates for officiating; however, it also means getting individuals who are committed.

Retaining officials is the key, especially given the lure of other non-high school or non-sanctioned events with potential weekend earnings, said Beau Rugg, assistant commissioner of the Ohio High School Athletic Association.

“The commitment at the high school level is a good one and people love it,” Rugg said.

There are an estimated 15,000 officials in Ohio. While the numbers are staying level across the state, there are needs in the sports of soccer, softball and baseball. Rugg wants people vested in the game and those willing to improve.

“How do I get better? The best officials at any level try to understand the game better,” Rugg says.

Barry Mano, president of the National Association of Sports Officials (NASO), couldn’t agree more. A reputable high school official is fair-minded, decisive and has a willingness to be evaluated, said Mano, who estimates there are 300,000 to 350,000 high school officials across the nation.

There are multiple issues at the forefront of the high school scene, including the question of who pays for background checks and the shortage of men, women and young people in the officiating profession. There is also unsportsmanlike behavior by players and fans, which causes great concern.

Mano said that school districts can provide a convenient setting for officials to do their jobs by including a dressing room, security and a welcome and safe environment before and after a contest.
Julie Voeck, a volleyball official from Wisconsin, serves on the NASO Board of Directors.

A lack of trained officials due to the growth of volleyball, and technology related to sports, such as online assigning and evaluation systems, are two significant issues that Voeck has noticed recently.
“NASO serves as a resource to state associations,” Voeck says. “Some recent examples include developing educational materials, background screens, social media policies and legal issues (employee versus contractor).”

All that information is beneficial as state associations continue to look at ways to attract qualified officials.

“While many officials leave the ranks due to poor sportsmanship displayed during contests they officiate, we also have to ensure that officials are equipped to manage games,” Pappas said. “Because we are so short on officials, we often have to thrust individuals into situations for which they may not be fully prepared. That experience can drive an official out of the avocation. We want to create an environment in which officials can succeed, which is why the proper training and evaluation of them is so crucial.”

In Colorado, the most significant issue is a sufficient pool of officials for all sports.

“All of our officials’ organizations and the (Colorado High School Activities Association) office have taken on the challenge to recruit new officials,” Robinson said. “Since no one idea for recruiting is good enough, we must try a variety of things – reduced dues for new officials, incentives to current membership to help find new recruits, etc.”

Robinson says in his experience the level of expertise in high school officiating in Colorado is “outstanding.”

“Officials have kept pace with the skill level and development of the players,” Robinson says.

Some school administrators in Colorado want to adopt the same methods used in compensating teachers when deciding to raise fees for officials, according to Robinson.

“Accountability is huge in their minds and they want officials to agree to be more visibly active in mastering their trade in exchange for increased fees,” Robinson says. “We are looking at tiered systems of pay for officials that reflect an officials’ growth and development through camps and other training options.”

Mike Dyer is high school sports editor for the Cincinnati Enquirer. He has been covering high school sports in Ohio since 2000 overall and has been in Cincinnati since 2004. He previously worked for the Akron Beacon Journal and the Sun Newspapers. Some of his articles have also appeared in the Washington Post, Orlando Sentinel, Cleveland Plain Dealer and Pittsburgh Post-Gazette.