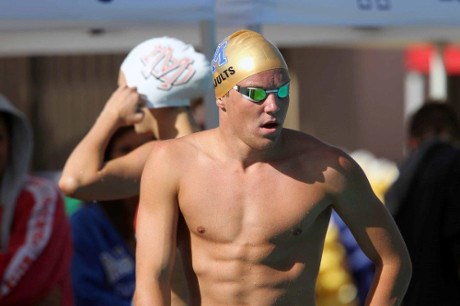 Granada’s (California) Maxime Rooney started the California Interscholastic Federation North Coast Section Swimming and Diving Championship finals with a bang. The junior swimmer broke the national high school record in the boys 200-yard freestyle with a time of 1:33.70. That’s 13-hundredths of a second faster than the previous record, set by former California swimmer Tom Shields in 2009.

“Untapered, unshaved, 200 best time, couldn’t be happier,” Rooney told East Bay Times. “I did really well in the third 50. I made an adjustment from yesterday, lighter on my arms on the first 100 so I could finish the back 100 with more energy.”

After the race, Rooney received much praise from the fans in the crowd at the Concord Community Pool. However, Rooney’s record time lasted just a short time atop the all-time rankings. Focus soon shifted to the CIF Southern Section championships where Grant Shoults of Rancho Santa Margarita Catholic bettered Rooney’s new national time in the same event with a time of 1:33.26 later that day.

Both Rooney and Shoults will compete in the 2016 U.S. Olympic Team Trials on June 26.

Maddie Koss is a summer semester intern in the NFHS Publications/Communications Department and a senior at Butler University.