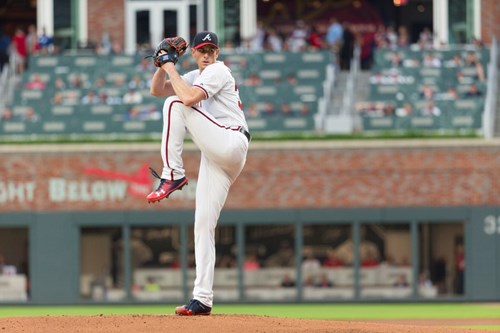 Brandon McCarthy didn't get to live out his childhood dream. So he decided to play professional baseball instead.

McCarthy, an alum of Cheyenne Mountain High School, had dreams of playing Division I baseball at Louisiana State University. His freshman year, he opted to go the junior college route. He went 12-0 as a starter in his lone year of junior college ball. The Chicago White Sox liked what they saw enough to draft McCarthy in 2002.

Throughout his career, he has pitched for seven major league teams and remained in the league for the better part of the last 13 years.

He's an avid Twitter user, often receiving praise for his comic delivery. He maintains perspective regardless of how well he's throwing on any given day.

Currently pitching for the Atlanta Braves, McCarthy took the time to talk with CHSAANow.com about topics ranging from pitch counts to whether or not altitude is really a factor when it comes to pitching.

Question: Something that Colorado has done in recent years is institute a pitch count rule, getting away from the limits of innings. If you can think back to when you were playing and with what you know now, is a pitch count a better way to develop kids and limit injuries?

McCarthy: I think that’s a really good question. And I don't know. I think more than anything, the pitch count limits the adult influence over a kid's career which I think is somewhat important. Being really competitive from ages 14 to 17 is a good thing for people who have aspirations for doing more. The wins and losses at that level aren't as important.

You get a coach, you get a parent, you get someone who desperately wants to win this for whatever reason and it puts the kid at risk. That’s what you’re protecting from.

I don't actually remember having innings limits when I was there, but it could be that I’ve forgotten it or wasn’t aware it. I’m not sure. I think those things are good, but I think over time I don’t know if they’ll lessen injuries.

For years we thought in professional baseball we should come back to down to 100 pitches and let’s go backwards that way. I don’t know if we’ve seen injuries go down other than shoulder injuries. Maybe throwing a baseball is just what does it. If you’re lowering the percentage even somewhat, I think it’s a good thing.

Q: You took the route of going to junior college for a year, you got drafted and then signed. It seems like these days, kids are going after the biggest D-I offer they can get ahold of. Is baseball different from football or baseball in that sense that there is no one path to play professionally and is it more important to find the right fit rather than the best offer?

McCarthy: Yeah. And I think the hardest thing about being 18 or having kids that will be 18 is that you don’t know what that route looks like. So the best fit is what you think at the current moment and then four months later, it’s the completely wrong fit. I’ve heard of a lot of kids at D-I schools where it was just the wrong choice but they picked it because their friends were going there or it was the most prestigious or whatever.

I forever will advocate for the junior college level for people who want to monitor themselves year after year. I think having to wait three years at a Division I school before you turn pro is a little bit tough for some kids in terms of striking while the iron is hot.

A good junior college that’s run properly and doing everything it’s supposed to do to develop kids, I think you can get good quickly and it’s less of a crazy situation that the NCAA has. You have to do your research and find the best fit for you, but it’s so different for each individual player.