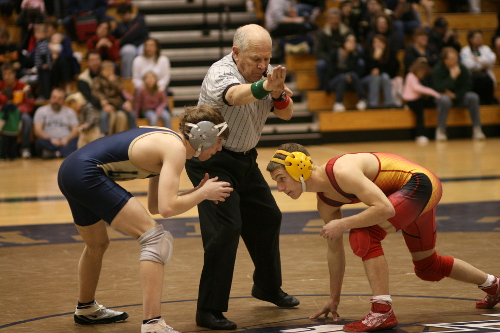 A more standardized pre-match procedure requiring referees to perform skin checks or verify that skin checks had been completed on-site by an appropriate health-care professional was approved by the National Federation of State High School Associations (NFHS) Wrestling Rules Committee at its April 8-10 meeting in Indianapolis.

This clarification of the skin-check rule for dual meets and tournaments, along with one other change recommended by the committee for the 2015-16 season, were subsequently approved by the NFHS Board of Directors.

Under Rule 3-1-4a, the new pre-match procedure further clarifies the duties of wrestling referees before a dual meet begins. A new rule (3-1-5) will add the same inspection requirements before tournaments. The actual requirements were not changed, only written in clearer, more specific language.

Alan Beste, executive director of the Iowa High School Athletic Association and chair of the Wrestling Rules Committee, said there continues to be national concern about communicable skin conditions in wrestling. Some of those conditions can pose significant health risks that may have lifelong effects.

“The two major rules changes reflect the committee’s feeling that it is important to emphasize this concern and give referees, who are the impartial parties at every competition, more responsibility in determining a wrestler’s readiness to compete safely,” Beste said.

The other rule change was to Rule 10-2-9, regarding a situation where two wrestlers in the championship bracket simultaneously cannot continue a match and the score is tied. A new criterion was added to the rule. The new criteria states, “the wrestler whose opponent has received an unsportsmanlike conduct penalty at any time during the match will continue in the consolation round.”  If neither wrestler received an unsportsmanlike penalty, then the previously set criteria will be used to determine advancement to the consolation bracket. The committee added this new criterion to emphasize sportsmanship during competition.

“I think it’s a good change,” Colgate said. “It puts more emphasis on sportsmanship in wrestling, which the committee feels is very important.”

A complete listing of the wrestling rules changes is available on the NFHS website at www.nfhs.org. Click on “Activities & Sports” at the top of the home page, and select “Wrestling.”

According to the 2013-14 NFHS High School Athletics Participation Survey, wrestling is the sixth-most popular boys sport nationwide with 269,514 participants. There were 9,904 girls who participated in the sport as well.