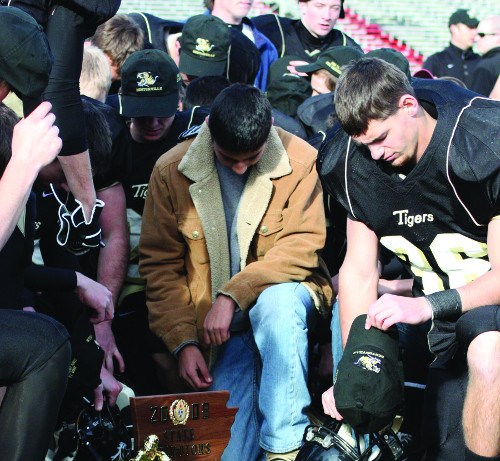 An ongoing challenge for school and athletics administrators is the question of the legal permissibility of prayer being conducted and other religion-related activities taking place at school events – both at sports contests and on other occasions. Dozens of disputes arise each year across the country regarding the issue, and the following are four examples that have occurred in just recent months.

On January 29, 2016, the Texas Supreme Court ruled 8-0 that a lawsuit should proceed by cheerleaders at Kountze High School who displayed banners bearing Bible verses at football games, overturning a state Court of Appeals ruling in 2014 dismissing the cheerleaders’ claims as moot because the policy prohibiting the banners had been reversed by the district. The Texas Supreme Court held that the issues in the case were not moot because the district never explicitly agreed that its elimination of the policy was a permanent decision and therefore the possibility existed that the district might reinstate the ban in the future. In 2012, Kountze School District administrators prohibited the banners believing that school-sponsored religious messages in a public setting like a high school football game violated the Establishment Clause in the First Amendment to the U.S. Constitution. The cheerleaders argued that their banners were non-school-sponsored, student-initiated religious expression protected by both the Free Exercise Clause and the Free Speech Clause in the First Amendment. The suit will now go forward to resolve the issue whether the Bible-verse banners are legally impermissible, school-sponsored religious messages or legally permissible, purely-student-driven communications.

In December 2015, the Florida High School Athletic Association (FHSAA) denied requests from school officials at Cambridge Christian School and its opponent, University Christian School, to use the public-address system in Orlando’s Citrus Bowl Stadium to conduct a public prayer before the Florida Class 2A state championship football game. Although pre-game prayers at private school sports events have consistently been held by courts not to violate the Establishment Clause because private schools are not “state actors” (governmental entities), the FHSAA argued that its state championship game was a public event sponsored by a state actor (the FHSAA) being held in a public facility (Citrus Bowl Stadium) owned by a governmental unit (the city of Orlando) and that a pre-game prayer would therefore constitute government sponsorship and promotion of a religious message in violation of the First Amendment. In January 2016, the Liberty Institute, a law firm specializing in religious freedom issues, sent a letter on behalf of Cambridge Christian School to the FHSAA demanding a policy change for future state playoff contests and threatening a federal lawsuit asserting violations of Cambridge Christian School’s rights under the Free Speech Clause and Free Exercise Clause in the First Amendment. As of the press date for this article, no suit had yet been filed.

In December 2015, Joe Kennedy, an assistant football coach at Bremerton (Washington) High School filed a religious discrimination complaint with the federal Equal Employment Opportunity Commission after, in November, the Bremerton School District placed him on paid administrative leave and then declined to renew his year-to-year, terminable-at-will coaching appointment because of Kennedy’s refusal to comply with a request from district officials to discontinue participating in pre-game locker room prayers and on-field, post-game prayers with players. At issue in the dispute is whether the coach, a paid employee of a public school, was engaging in a legally impermissible religious activity by impliedly promoting religion to or coercing participation in a religious activity by the players or whether he was engaging in a legally permissible private religious activity independent of his role as a government employee.

In February 2016, two bills were introduced in the Georgia General Assembly – House Bill 870 and Senate Bill 309 – that if enacted would mandate that schools which receive state funding “cannot participate in an athletic association which prohibits religious expression on the clothing of student-athletes.” The inciting incident that led to the introduction of the legislation was the fall 2015 situation involving John Green, a cross country runner from West Forsyth High School, who finished third in the Georgia Class 6A state meet, but was disqualified for wearing a headband bearing the notation Isaiah 40:30-31 (NIV: “Even youths grow tired and weary, and young men stumble and fall; but those who hope in the Lord will renew their strength. They will soar on wings like eagles; they will run and not grow weary, they will walk and not be faint.”). The Georgia High School Association (GHSA) issued a press release stating that the runner was disqualified not for what was written on the headband, but for violating a rule that uniforms must be “unadorned except for a logo” and for wearing the headband despite being warned by GHSA personnel before the race to take it off. The Green family, several religious freedom advocacy groups, and numerous Georgia legislators argued that despite the GHSA’s claims that its actions were “content neutral,” the First Amendment’s Free Exercise Clause and Free Speech Clause require that a religious exception should be incorporated into the rules regarding uniforms for non-school-sponsored messages that are intended to be communicated solely by an athlete.

The passions inflamed among the parties in all four of these cases, and in the dozens of similar situations that arise each year across the country, reflect the tension between two conflicting viewpoints regarding the constitutionality of prayer and religious activities in schools. The first perspective is that the need for educational institutions to play a role in the moral and character development of our nation’s youth necessitates that the First Amendment’s Free Speech Clause and Free Exercise Clause be interpreted to provide ample latitude for religious activity initiated by persons acting privately, including coaches and student-athletes, to facilitate the role-modeling of the values society wishes to be instilled in young people. The second viewpoint is that the Founding Fathers, most of whom hailed from countries where coercion and duress regarding religious beliefs were commonplace, wrote the First Amendment’s Establishment Clause specifically to protect those of faith by ensuring that even if an individual’s religious beliefs are in the minority in a particular community – including school community – that person will be free of any form whatsoever of government-sponsored pressure to listen to or adhere to the tenets of a faith with which he or she disagrees.

In its 2000 decision in Santa Fe ISD v. Doe, the United States Supreme Court established a rule of law that strikes a balance between the two conflicting viewpoints regarding the constitutionality of prayer and religious activities in schools. Specifically, the Court addressed the question whether a school district policy permitting student-led prayer over the public-address system at a public high school football game violates the Establishment Clause or whether the practice must be permitted under the Free Speech Clause and Free Exercise Clause.

The dispute began when Doe, allowed by the federal courts to litigate anonymously as protection against intimidation and harassment, challenged the policy of Santa Fe (Texas) High School which allowed the student who held the elective office of Student Council Chaplain to deliver or choose another student to deliver a prayer over the football stadium’s PA system before each game. The Supreme Court held that because the school was a public institution, because it was involved in the selection of the speaker, because the message was broadcast over the stadium’s PA system to a captive audience, and because the communication occurred at an official school function, members of the crowd would certainly interpret the prayer as a school-sponsored message. “Regardless of the listener’s support for or objection to the message, an objective Santa Fe High School student will unquestionably perceive the pregame prayer as stamped with her school’s seal of approval.” Therefore, the Court found the practice to be in violation of the Establishment Clause.

However, it is important to note that in the Santa Fe ISD case, the Court also clarified that the Establishment Clause does not “impose a prohibition on all religious activity in our public schools. Indeed, the common purpose of the Religion Clauses is to secure religious liberty. Thus nothing in the Constitution as interpreted by this Court prohibits any public school student from voluntarily praying at any time before, during or after the school day.” The religious liberty protected by the First Amendment is violated only when the school “affirmatively sponsors the particular religious practice of prayer.”

In other words, the Court concluded that the Free Speech Clause and Free Exercise Clause protect prayer or religious activity initiated by individuals acting privately. Only prayer or religious activity initiated by governmental entities (public schools) or governmental agents (those acting at the direction of schools such as school officials, teachers and coaches) is prohibited.

Based on the precedent set forth by the U.S. Supreme Court in the Santa Fe ISD case, student-athletes acting on their own, without any involvement of the school or its personnel, may engage in prayer or religious activity. Members of a team may, therefore, spontaneously decide to take a knee in the locker room for a pre-game prayer or gather on the field for a post-game prayer or engage in other religious activity solely as individuals acting privately. Schools need only focus on ensuring that coaches and other school personnel – who even as much as institutions might desire to have them involved in the spiritual development of students – remain detached from student religious activities to preserve the constitutionality of those student practices, keeping in mind the intent of the founding fathers to use the Establishment Clause to protect those of faith by ensuring that they are not expressly or impliedly coerced by the government or government officials into listening to religious messages that conflict with their personal beliefs.
With regard to the handling by educational institutions of the many permutations of issues regarding religious practices in schools, the U.S. Department of Education in 2003 issued a policy directive titled Guidance on Constitutionally Protected Prayer in Public Elementary and Secondary Schools, which sets forth a detailed summary of constitutional principles governing topics such as accommodation of prayer during instructional time; prayer during non-instructional time; organized student prayer groups and activities; prayer by teachers, administrators and other school employees; moments of silence; religious expression in class assignments; prayer at graduation and baccalaureate ceremonies; and religious expression at student assemblies. The full-text of the policy guidance is available at www2.ed.gov/policy/gen/guid/religionandschools/prayer_guidance.html.