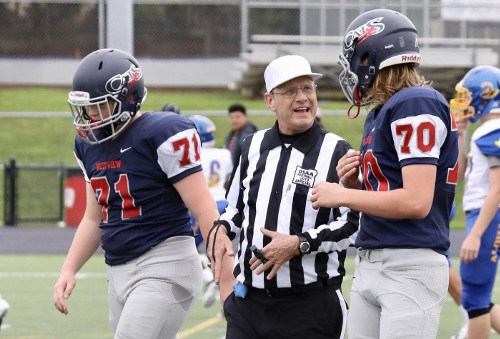 The football official in the white hat stands at the middle of the Westview High School football field and turns his head one way, then the other, to get the attention of the two rows of high school junior varsity players from Westview and Aloha preparing for the coin toss.

“Gentlemen,” he begins, “the word of the day is sportsmanship. Make your teammates proud. Make your parents proud.”

It’s the same way Jim Alex begins every game. If there’s anything he’s learned by officiating sports into this, his 50th year with a whistle in his mouth, is that sportsmanship makes a game — any game — more fun and teachable.

He’s also learned, in more than the 1,100 games he’s officiated now, how to get his fractured foot into a bucket of ice as soon as possible, to keep his wallet (and insurance card) with him in case he gets evacuated to a hospital and how to officiate a game with his arm in a cast.

He’s made lifelong friendships that he cherishes as much as anything he knows. He wears patches on his sleeves in both football and basketball games to commemorate absent friends.

What you Need to Know About COVID-19 to Protect Yourself and Your Fa.