Basketball, football, baseball and even bass fishing are all sports sanctioned by NFHS-member state high school associations. The Oklahoma Secondary School Activities Association (OSSAA) sanctions sports you would find in nearly every association nationwide, but it also has a unique “sport” all to its own – service learning.

Every September, usually the second or third week, the OSSAA holds what it calls “Win-Win Week.” For that week, member schools are asked to promote cancer awareness, and the majority also put on fund-raising campaigns.

The OSSAA also encourages schools to submit reports documenting their week spent raising awareness and money. Although not required, many schools produce videos to show their accomplishments and continue raising awareness. From these reports, the OSSAA selects a state champion in each of the state’s seven basketball classifications.

However, winning the championship is about more than just raising money since the OSSAA selects winners based on innovation. Whichever school raises awareness in the most creative and effective ways takes home the championship. 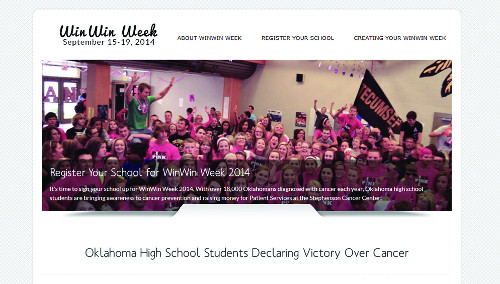 Winning may be about more than just money, but the program has experienced a good deal of fundraising success as well. In the five years since the week was created, more than $500,000 has been raised for the Oklahoma University Stephenson Cancer Center in Oklahoma City.

Amy Cassell, an OSSAA assistant director, is in charge of coordinating the week. She said the program allows students to shine off the playing fields.

For a program that has grown rapidly, it was born out of a casual conversation. Cassell was having lunch with a friend who worked in development with the cancer center, when she asked about his work. Cassell said one thing led to another, and the idea of a partnership was hatched.

“I just said, ‘Hey, wouldn’t it be cool if we could get the schools to participate in a service learning project to raise awareness? Sounds like a win win,’” she said.

After that, the program not only had its concept, it had a name, too.

This past year, the OSSAA partnered with a group from Arkansas to create a website to help schools with their fund-raising efforts. The site, www.HopeCanWin.com, offers products with the aim to help schools raise money.

The website sells products such as pink shakers, pink ribbon helmet stickers and pink shoelaces at discount prices. By purchasing these products, the schools can then sell them at a markup to increase their charitable revenue.

This year, the official dates for the event are September 13-18; however, schools are welcome to hold their week around that same time if another week works better for an individual school.

Cassell said she has hope the event will spread across the nation.

“My dream is that every state association engages in something similar,” she said. “And eventually no one worries about cancer because a cure is found.”

Ben Sieck is an intern in the NFHS Publications and Communications Department and a junior at Butler University.