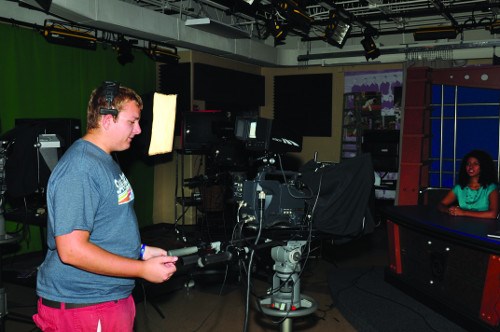 Video streaming is a large part of today’s technology-driven world. It allows people in all locations to view live action of something that may be taking place thousands of miles away. As live streaming grows in popularity, it becomes easier to bring streaming capabilities into the classroom setting.

The NFHS Network School Broadcast Program (SBP) has been helping schools and students broadcast their events across the nation for nearly five years.

“Our broadcasts are great community public relations pieces to promote the good things that a lot of schools don’t realize they can do,” said Jon Souders, director of digital media production at Cleveland (Tennessee) High School.

“More than half the schools didn’t have a broadcast program before getting involved with SBP and have now built classes and clubs around it,” said Robert Rothberg, vice president of PlayON! Sports and the NFHS Network.

El Capitan High School in Merced, California, used the SBP to develop its Digital Media Club. “The system was brand new to us but very easy to learn,” said Alex Castillo, information technology service and Digital Media Club advisor at El Capitan. For other schools that already have media programs, it is simple to tie in with work they are already doing. Students are already highly involved with technology, and when they recognize this hands-on ability to gain skills in a potential career, they flock to whatever class or club is providing the opportunity.

“It is nice to know and be a part of something that could be seen from all over,” said Jacob Frederick, El Capitan student and Digital Media Club president.

Since 90 percent of all broadcasts on the NFHS Network are provided by students, there truly is plenty of opportunity for students to gain broadcasting experience.

“It provides an outlet to showcase student work at a national level and get them involved in something big,” Souders said.

To become a part of the SBP, a school simply needs a camera, a laptop and an Internet connection. Since most schools already have these items, broadcasting events is available at no cost to the school. To join, schools simply need to contact the NFHS Network and to receive the free software necessary to begin broadcasting online.

Branding the school and students that are providing the broadcasts are important to the recognition of media classes/clubs. Brand recognition with whomever may be watching potentially grows interest and funding into digital media efforts at the school. The software allows for schools to insert graphics and commercials directly into broadcasts. This includes sponsor graphics and advertisements, which allows schools to raise revenue from local sponsorships.

“When traveling with the club, I see other schools using different programs and wonder why when they can get this for free and make money,” Delgado said.

Traveling with broadcast capabilities allows for big events that aren’t conducted at the school to be seen by parents.

“The nice thing is that other schools have it and allow us to join them to broadcast and we can bounce ideas off of each other,” Castillo said.

Developing connections with other schools expands what is included in a media program or gives other schools ideas for things to try within their programs. Gathering a following of parents and graduates generates more than an increase to media programs but also in event ticket sales.

“Athletic directors are worried they will lose ticket sales to our broadcasts, but it has had the opposite effect and generated interest,” Souders said.

With the incorporation of social media into many school’s athletic departments, short video elements from broadcasts such as highlights or promotional videos, provide additional elements to generate interest in many school activities.

Bryce Woodall is an intern in the NFHS Publications/Communications Department and is a senior at Franklin (Indiana) College studying public relations.