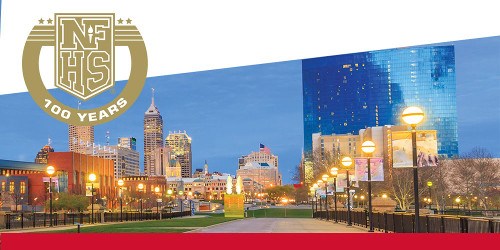 Key Events to be Streamed on NFHS Network

In addition to normal workshops and sessions, this year’s Summer Meeting will feature the Centennial Celebration of the NFHS, which has been providing leadership for high school athletics and performing arts since its founding in 1920.

The NFHS is composed of state high school associations in the 50 states plus the District of Columbia. About 1,000 individuals are expected to attend the Summer Meeting, including staff members and board members from the 51-member state associations.

Twelve individuals will be inducted into the National High School Hall of Fame on June 30, including Dusty Baker,Seimone Augustus, Derrick Brooks, Damon Bailey and Tracey Fuchs.

Baker was one of California’s top four-sport athletes at Del Campo High School in Sacramento prior to his outstanding 19-year baseball playing career and 22 years as a manager with four professional teams. Augustus led Capitol High School in Baton Rouge to a 138-7 record and two Louisiana girls basketball state titles in four years before her exemplary career at Louisiana State University and professional career with the Minnesota Lynx.

Brooks was selected National Defensive Player of the Year by USA Today as a high school senior at Pensacola (Florida) Washington before his stardom at Florida State University and the Tampa Bay Buccaneers. Bailey, Indiana’s all-time leading boys basketball scorer, also led Bedford (Indiana) North Lawrence High School to a state basketball championship in 1990 while earning National Player of the Year and Indiana Mr. Basketball honors. Fuchs was one of field hockey’s top stars at all levels, setting national records at Centereach (New York) High School before leading the University of Connecticut to a national championship and playing in four World Championships.

Three outstanding coaches will be inducted in the 2019 class, including Joe Gilbert, who has won nearly 4,000 games in softball, baseball, girls basketball, boys basketball and football in 65 years at Barnsdall (Oklahoma) High School and is still active at the age of 86.

The two administrators in the 2019 class are former executive directors of the NFHS – the late Charles W. Whitten of Illinois and Bob Gardner of Indiana. Whitten led the National Federation from 1927 to 1940 prior to the establishment of a full-time office, and Gardner retired last year after 18 years on the NFHS staff, including the final eight years as executive director.

The other two members of the 2019 class are the late Ralph Stout, who was involved with football and basketball officiating with the Tennessee Secondary School Athletic Association (TSSAA) for 65 years; and Ginny Honomichl, a longtime coach, administrator and national coaching leader from Baldwin City (Kansas) High School who was the first female to serve as president of the Kansas Coaches Association and the NFHS Coaches Association.

Among the topics that will be discussed at the 52 workshops during the NFHS Summer Meeting are inclusion of students with a disability, competitive equity in classification alignments, minorities in leadership, mental health, retaining sports officials, hazing prevention and adjudication for music administration.

In addition, the Legal/Sports Medicine Workshop – one of the most popular workshops each year – will be held at 1 p.m. on June 30. This event provides an ideal opportunity to discuss current legal and medical issues.

The Second General Session on June 30 will feature NFHS President David Jackson, NFHS Executive Director Karissa Niehoff and other staff members, and the Closing General Session on July 2 will feature speaker Alex Sheen, founder of “Because I Said I Would,” a social movement and nonprofit organization dedicated to the betterment of humanity through promises made and kept.

The Second General Session can be accessed on the NFHS Network at https://www.nfhsnetwork.com/events/nfhs/evt808dffc2bc.

The Summer Meeting Luncheon will be held at 12 p.m. EDT on July 1 and will feature the presentation of NFHS Citations to 12 individuals. State association honorees include Dick Durost of Maine, Jill Masterman of Maryland, Joyce Franklin of Mississippi, Chris Kaufman of Indiana, Sue Carlsrud of North Dakota, Joey Walters of Arkansas, Diane Marshall-Freeman of California and Mike Colbrese of Washington.

The Summer Meeting Luncheon can be accessed on the NFHS Network at https://www.nfhsnetwork.com/events/nfhs/evtddc83dd1c1.

The main feature of this year’s Summer Meeting is the Centennial Celebration at 6 p.m. EDT on July 2. This celebration of the 100 years of the NFHS will be held in the Sagamore Ballroom at the Indiana Convention Center.

The #NFHS100 Centennial Celebration will recognize six former executive directors of the NFHS and will celebrate the organization’s years in Chicago, Elgin, Kansas City and Indianapolis.

The Centennial Celebration can be accessed on the NFHS Network at https://www.nfhsnetwork.com/events/nfhs/evta3d60395df.

Luke Modrovsky is a 2019 summer intern in the NFHS Publications/Communications Department. He is a senior sports management and communication studies major at Wilkes University in Wilkes-Barre, Pennsylvania.