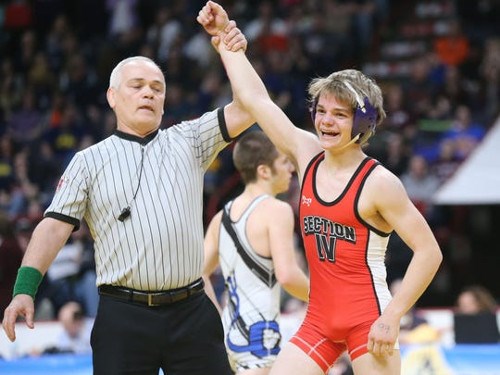 From the Binghampton Press and Sun Bulletin:

It’s a weighty issue, quite literally.

What to do about the little guys, the ones who kick off the championship round of the New York State Public High School Athletic Association Wrestling Tournament?

New York is the lone state that has a 99-pound weight bracket – the lightest of its 15 classifications. When the national federation discontinued 99 pounds in 2012, NYSPHSAA didn’t go along.

But that may change. There’s been talk at the state level of dumping the weight class. It won’t happen in the 2019-20 season, but there are no guarantees beyond.

Compelling are the arguments for and against 99 pounds.

“There are discussions at the state level right now,” Section 4 Wrestling Coordinator Rick Armstrong said. “I don’t have a dog in the fight. I see pros and cons. The rest of the nation is not using 99 pounds, so I’m OK with New York doing it.