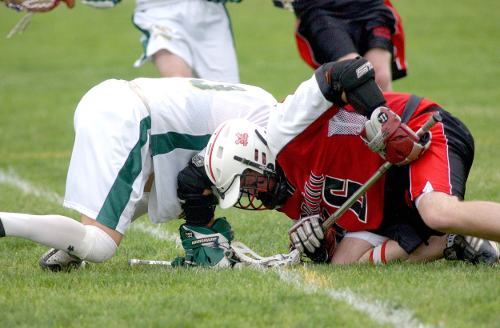 The revision to Rule 4-3-3 was one of four major changes recommended by the National Federation of State High School Associations (NFHS) Boys Lacrosse Rules Committee at its July 13-15 meeting in Indianapolis. The committee’s recommendations were subsequently approved by the NFHS Board of Directors.

Articles 3 through 6 of Rule 4-3 were condensed into a new Article 3, which clarifies the faceoff procedures and roles for officials and players. When directed, players will go to the faceoff position with their crosses properly placed. If the official is satisfied with the position, then the ball will be placed between the crosses for the faceoff. Previously, the ball was placed on the ground first. Players are still required to remain motionless in the correct position after the official says “set” and until the whistle is blown.

Rules 1-6-1 and 1-8 were also revised to address issues with the ball becoming stuck in the crosse, including the back of the crosse after a faceoff. The change to Rule 1-6-1 alters the dimensions of the crosse and will take effect beginning in 2018 to allow for phased implementation.

Another change (Rule 4-14-3) defines a new “over and back” rule, which states that the offensive team may not carry, pass or propel the ball into its defensive half of the field once it has been advanced into the goal area. An infraction will result in a turnover or play-on.

“We believe lacrosse is moving in the right direction to continue to minimize the risk to our student-athletes and improve the game experience,” said Susie Knoblauch, NFHS director of performing arts and sports and liaison to the Boys Lacrosse Rules Committee. “Our rules changes support that trend and also create more consistent and fair play for everyone.”

In addition to the four major changes, the Boys Lacrosse Rules Committee approved five Points of Emphasis for the 2016 season. Points of Emphasis are developed by NFHS rules committees and should receive special focus and attention by officials, coaches, players, fans and other leaders within the high school setting.

Points of Emphasis developed by the Boys Lacrosse Rules Committee for the 2016 season are as follows:

Defending the Crease – It is recommended that coaches not teach nor encourage field players to block the goal when the goalkeeper has vacated the goal crease area.

Jones is a summer intern in the NFHS Publications and Communications Department and a junior at Indiana University Bloomington.