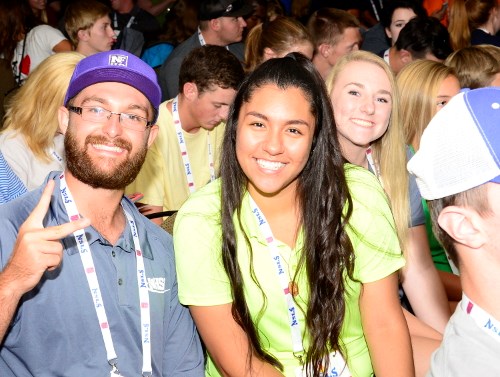 Earlier this month, the NFHS hosted more than 160 student ambassadors from 30 states and Canada at the National Student Leadership Summit (NSLS). The three-day event, held at the Hyatt Regency in Indianapolis, helped the student ambassadors learn new techniques and ideas to take back to their respective teams and states.

“I was extremely pleased with the group of student ambassadors this year,” Elliot Hopkins, director of the NSLS and NFHS director of sports and student services, said. “These young people were really on top of their games and very established. I was stunned at the level of maturity and self-awareness these students had.”

The opening ceremony was kicked off by speaker C.L. “Shep” Shepard, founder of Keep The Change Inc., who told the students about his journey through life and the things his now impactful story taught him at that time.

Throughout the summit, the student ambassadors attended four hour-long sessions on topics ranging from perspective and inclusion to managing a digital identity on social media.

Omari Pearson, founder of Passion to Purpose, LLC, led the workshop on social media and how to create a positive digital identity or repair a negative one. Pearson said when a student acts inappropriately on social media, the student is setting him or her back for possible accomplishments.

“When you are doing things like that, you are spending time on things not pushing you towards you dreams,” Pearson said. “The difference between a dream and a fantasy is nothing more than a plan.”

Another session at the summit was on perspective and inclusion led by Dr. Kevin Ringhofer, a national trainer and consultant specializing in prevention, health promotion and leadership development.

Dr. Gregory Dale, professor and director of sport psychology and leadership programs at Duke University, spoke about effective communication with teammates and adults during his session at the summit. The student ambassadors tackled tough subjects including how to stay positive and be their best self at practice.

“One of my athletes at Duke used to say he would come into practice as Clark Kent, but while he was at practice, he was Superman,” Dale said. “Think about what your purpose is every day. You are either getting better today or getting worse.”

The final session was led by Deb Hult, co-founder of Core Trainings, about relationship building and maintenance.

“The kids really took to the Special Olympic experience,” Hopkins said. “[Plainfield High School] was kind and generous to us and gave us anything we asked for. That really speaks to the compassion of the athletic department and other staff there.”

The closing ceremony showcased speaker Monica Pool Knox, head of global talent management at Microsoft where she develops strategies and executes key priorities across the company’s employee base.

“Our goal was to let these kids have a sense of freedom and learn, all the while keeping them safe and secure,” Hopkins said. “We controlled as much as we could, but we didn’t want to inhibit their learning. I’m excited to watch these students and see them grow in the future.”

Hopkins said he is already looking ahead to next year’s NSLS and the new student ambassadors.

“I hope we are able to sustain this for a long, long time,” Hopkins said. “I want this to become institutionalized as something we always do every year after the Summer Meeting.”