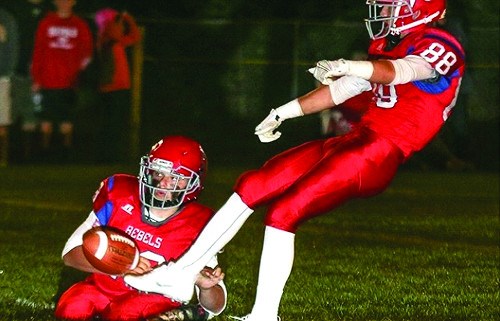 Like most other students at Moose Lake (Minnesota) High School, a school with 184 students, sophomore Danny Lilya plays a variety of sports.

However, unlike those other students, Lilya was born with a broken back, is a paraplegic, and has been confined to a wheelchair his entire life.

Nonetheless, that has not prevented him from participating in the sports he loves, including football, sled hockey, track and wheelchair softball. By doing that, he literally has all four seasons covered with different sports. Last fall, Lilya was the holder on extra points and field goals for the Moose Lake/Willow River Rebels football team.

In recognition of his many impressive accomplishments and his indefatigable spirit, Lilya has been chosen the 2017 recipient of the National High School Spirit of Sport Award by the National Federation of State High School Associations (NFHS). He will receive his award June 29 at the NFHS’ 98th Annual Summer Meeting Opening Ceremony at the Dunkin’ Donuts Center in Providence, Rhode Island.

Despite the attention that Lilya has received from his extraordinary achievements, Moose Lake High School Athletic Director Tony Andres said, “Danny’s just an average teenager - he’s very personable, he’s fun and he participates in a lot of different things.”

“My favorite sport is sled hockey,” Lilya said. “It just gives me something to do with other disabled people. 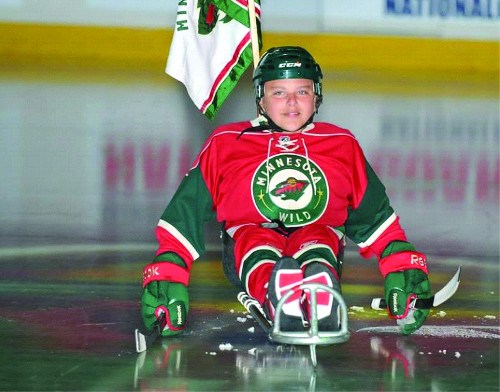 “I also like playing football, because it lets me be closer friends with my teammates when we’re doing all the work in practice and with staying in shape. It was super exciting to be able to be part of a scoring play when I got into my first game last fall against Barnum High School.”

As a participant in Moose Lake athletics, Lilya clearly benefits from having a forward-thinking football coach in Dave Louzek.

“Part of Rebels football has always been including everybody,” Louzek began. “Among them, we have a coach who has Down syndrome and student managers who have special needs. We find roles for individuals to join Rebels football to contribute and to be involved in every aspect of our program.

“Toward the end of the football season his ninth-grade year, we got Danny into a game for one defensive play. The next week, he came to me during practice and said ‘Coach, I think I could be the holder for extra points.’ At the start of this past season, we had Danny practicing as our holder every day during the extra-point session of our daily practices.

“Danny has displayed a great deal of courage in overcoming the challenge of participating in high school football while confined to a wheelchair without the use of his legs. As a holder for our extra point/field goal unit, he proves that anybody who is willing to work hard and truly wants to contribute can play an important role on a team and in life.”

When it’s time for Lilya to enter the game, he wheels out on to the field and climbs out of the wheelchair, which is then brought to the sideline. He receives and holds the football while sitting on both knees. After the kick, someone brings the wheelchair back on the field and he climbs back in. Just like any other high school special team player across the country, Lilya says “It’s just the best feeling in the world,” when he gets into the game.

“Danny has huge hands which allow him to handle the ball very well. He has practiced a lot which has helped with his great technique,” football place kicker Nick Wegge said. “I don’t view Danny as being a disabled player – I look at him the same way I look at anyone else. He fits into this team very well.”

“As his fellow teammates, Danny inspires all of us,” football long snapper Tyler Mehrkens said. “He is one of the bravest and most courageous kids I know. He is not disabled, and I believe that’s the statement he is trying to make. Danny proves people wrong time and time again.”

“I am thankful for our coaches, the officials, and coaches of our opposing teams that have welcomed all of our students into the game at one time or another, regardless of their different abilities,” said Moose Lake High School Principal Billie Jo Steen. “I remember watching Danny participating in plays in junior high while in his wheelchair, and this year when I saw him getting wheeled out for that first extra point hold, it was quite a moment. As a principal, that’s what you hope for all of your students, for them to find their niche here at school, to find their role and participate in something bigger than themselves, and to be part of a team. As with all our students, Danny is an important member of our school community. His determination is an inspiration to all of us.”

Looking ahead to his final two years of high school and beyond, Lilya already has goals identified.

“As far as my next two seasons in football, my goal is probably to get 100 percent on our field goals,” Lilya began. “We also want to get back to state and win the state title. During my freshman year, we made it to state. 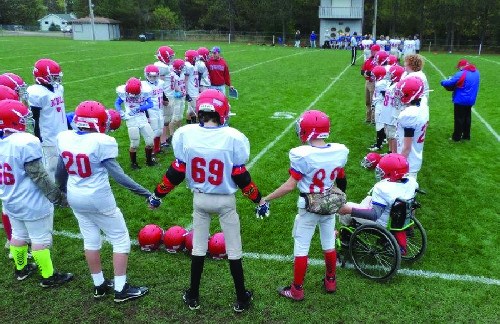 “I’ve also thought about my life after high school a little bit. I want to go into sports management or sports marketing – I’d like to work for a professional hockey team.”

“I think the thing about Danny that makes me the proudest is his ability to put himself out there and not be a ‘half-empty cup’ kid - his cup is ‘over-full,’” Sheryl said. “He figured out he was different and his legs didn’t work at age three – and he said he hated his legs, hit them and cried. I cried with him. For many years, he begged to have his legs cut off so he could get prosthetic legs because he figured he could walk with them. He has grown into not wanting his body to be different because that’s just how he was made. He is accepting of everyone and we couldn’t be prouder.”

“Danny doesn’t use his condition as an excuse to get a free pass in life,” Dan said. “He told me the other day that he wanted to be a Marine like I was. I said ‘Semper Fi, Danny.’ “The wheelchair kind of becomes invisible … he is every bit part of the football program as are the able-bodied athletes who are out there.”

Perhaps Danny himself summed it up best when he said, “The wheelchair doesn’t define you. If you want to do something but you’re disabled, if you have the right mindset, you can still go out there and do it.”