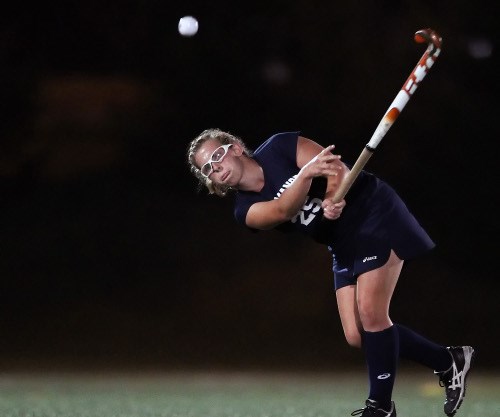 The “long-hit procedure” in high school field hockey will be replaced by a 25-yard free hit effective with the 2016 season.

This revision in Rule 7-3-2 was one of eight rules changes recommended by the National Federation of State High School Associations (NFHS) Field Hockey Rules Committee at its January 13-15 meeting in Indianapolis. All rules changes were subsequently approved by the NFHS Board of Directors.

Beginning next season, the attacking team will be awarded a 25-yard free hit instead of a long hit when a defender unintentionally causes the ball to go across the end line or if the ball glances off the stick/person of a defender in this area and goes across the end line. Play will be re-started with the ball on the 25-yard line that is in line with where it crossed the end line, and all procedures for taking a free hit will apply.

Mark Koski, NFHS director of sports, events and development and liaison to the NFHS Field Hockey Rules Committee, said the new procedure for awarding the attacking team a 25-yard free hit will eliminate the need for the long-hit mark on the field. As a result, the long-hit line will be eliminated from the field diagram in the NFHS Field Hockey Rules Book.

With the requirement for field players to wear eye protection that meets the current ASTM standard, the committee eliminated language that permitted other protective devices such as face masks. Koski said that the face masks do not meet any safety standard for ball or stick impact, nor do they offer any shatter resistance.

A change in Rule 10-3-2 last year dealing with restarts for extended-play penalty corners eliminated the clear definitions for when a penalty corner, during regular play, is considered to be completed. The committee noted that the exception to the rule added in 2015 should apply to an injury during regulation play as well as extended play.

Effective with the 2017 season, the home team shall wear white socks/sock guards only, thus eliminating the “light-colored” option. The committee noted that since the home team is required to wear single solid white uniform tops, it should wear only white socks to match the uniform top.

In another equipment change, Rule 1-7-1 will now permit the goalkeeper’s uniform top to be multiple colors to ensure contrasting uniforms with field players. In addition, effective with the 2017 season, a visible number should be on the front and back of the uniform top.

Regarding penalty strokes, the committee eliminated the final option (Rule 11-1-1e) for when a penalty stroke is awarded – “The defending team continues to deliberately cause the ball to go over the end line” – since the rules have evolved to allow umpires to better manage this situation if it occurs.

The committee approved an additional penalty in Rule 1-5-6, which addresses an entire team wearing illegal uniforms: “When an illegally uniformed team is unable to correct the situation or cannot verify state association approval of the uniform, the game shall be played. The referee must, however, notify the state association following the game.”

A complete listing of all rules changes will be available soon on the NFHS website at www.nfhs.org. Click on “Activities & Sports” at the top of the home page, and select “Field Hockey.”

According to the 2014-15 NFHS High School Athletics Participation Survey, a total of 60,549 girls participated in field hockey at 1,753 schools across the country.