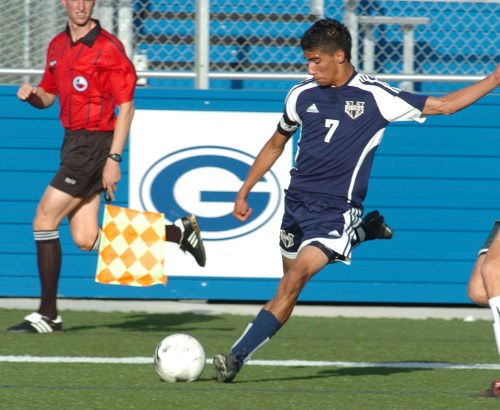 A new rule allowing the kicking of the ball in any direction to begin play in high school soccer is among the rules changes approved for the 2017-18 season.

The new kickoff procedure is one of eight changes recommended by the National Federation of State High School Associations (NFHS) Soccer Rules Committee at its January 24-25 meeting in Indianapolis. All rules changes were subsequently approved by the NFHS Board of Directors.

Previously, the ball had to be kicked forward from the center of the field to begin play at the beginning of the game, after halftime and after each goal. The new rule states that the ball may clearly move in any direction.

“There have been a number of rule changes in soccer (at other levels), so we look to see if they are appropriate for high school competition,” said Theresia Wynns, NFHS director of sports and officials and liaison to the Soccer Rules Committee. “We want to ensure that the rules we consider are what is best for the (high school) game and not difficult for officials to implement.”

The change to the kickoff procedure in Rule 8-1-3 requires a change in Rule 13-1-2, which now states that all free kicks, with the exception of penalty kicks, may be taken in any direction. The kickoff has been eliminated as an exception.

In addition, Rule 10-1-3f states that a goal may not be scored directly from a kickoff into the kicking team’s own goal. This change is consistent with the concept that a team cannot score against itself from a free kick.

Players are now permitted to use a stutter step or a hesitation move when taking a penalty kick as long as there is continuous movement according to a change in Rule 14-1-4. Stutter-stepping is not an interruption of movement toward the ball.

A change in Rule 4-2-9 permits a soft-padded headgear that meets the ASTM standard to be worn. This allows, but does not require players to use the newer headgear styles that are not just headbands. Wynns said schools, students and parents are free to make their own assessments of this equipment. Due to this rule change, Exception No. 1 to Rule 4-2-1 is no longer necessary and has been removed from the rules book.

A complete listing of all rules changes will be available soon on the NFHS website at www.nfhs.org. Click on “Activities & Sports” at the top of the home page, and select “Soccer.”