There are several slightly-mysterious principles in coaching that are pursued while leading teams to success. These principles include how best to establish systems of structure for the staff and players (organization), how to maximize our limited time and resources (efficiency) and, ultimately, how to inspire 14- to 18-year-old student-athletes to commit every fiber of their being to the team and its success (motivation). To learn more about coaching, I’ve questioned mentors, discussed with peers, and wondered how best to reach these seemingly unattainable goals since my freshman year of high school. While it’s acknowledged that we have never completely “figured it out,” the success we have achieved at our high school in its short, six-year existence is attributed to an entire athletic staff pushing one another to chase these coaching principles. This past year brought those efforts to fruition as our high school won the state award for our performances in district and state championships for our classification.

Being organized is one aspect of being disciplined, a key trait of all consistently successful coaches. For a staff, this can consist of daily and weekly meetings scheduled at the same time to avoid confusion; a master duties checklist combined with a year-long calendar (this allows coaches to know what and when their jobs are throughout the entire year); practice schedules and depth charts all accessible via campus interweb or Google Drive applications; and the consistent use of clocks.

While being a “clock watcher” is looked down upon in coaching, it must be utilized to stay organized and timely. Programs can use segment clocks that display countdowns on both the field and in the weight room, allowing everyone (players and coaches) to know exactly where they need to be and when they need to be there. Players can be informed during position meetings what practices will consist of and when they will take place. Players should constantly be reminded about staying on the move from period to period. Transition is included into segments so that when the buzzer goes off and the period changes players and coaches alike are ready for the next activity. In addition, there is a commitment to stay true to these time organizers as they encourage efficiency, which is the second goal of this article.

For the topic of efficiency, it should be known that a position group can typically have, at most, 10-15 minutes of individual time during practice. With that limitation, it is necessary to utilize individual drills that can train multiple skills for 20-30 athletes, and push them to stay conditioned for their position. For example, “Star 9” is one drill that promotes quickness, cutting sharply and precisely, catching the football from all angles, and turning upfield as fast as possible. Training two of these skills at once allows every player to complete “Star 9” in about three minutes. The diagram below illustrated “Star 9.” There is one line of receivers, and for each catch they are working the final three steps of their cut (“plant, jab, stick”). After every catch they burst upfield and then jog around the drill until handing the football to a coach before moving in line to the start position for the next catch with no stopping between each catch.

While the drill may appear complicated to parents or other coaches, players love the drill as it doesn’t require a lot of running. Additionally, the rhythm of the drill keeps them moving and, of course, they love to catch the football. 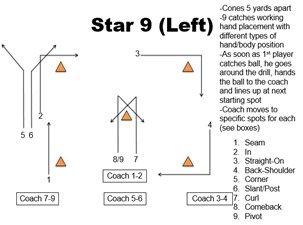 Probably the most difficult subject to master daily and yearly is motivation. This critical piece of the puzzle for every team begins with the program foundation. Those that reach success year in and out are built not on winning games or championships, but on personal traits that every young man or woman seeks to exemplify. These “hallmarks” consist of discipline, effort, toughness and honor. Motivation can come in many forms. For example, a wide receiver group can practice the light-hearted idea of “Tennis Ball Tuesday,” when individual drills feature tennis balls in the place of footballs. Players have a little extra fun and boost of energy, while continuing to fine tune their skills.

On the other end of the spectrum are more serious and adrenaline-inducing motivation techniques. Position groups can complete written tests about opponents; however, the motivation factor comes with two small additions to the tests. The first is a motivational quote at the bottom of the test, making it the last thing they see and place in their minds. The second is a symbol representing the identity of the group. Wide receivers are portrayed as players who are selfish and play strictly to catch the football as often as they can. To communicate the desire for physical team play, the group developed a common identity as its representation. Lastly, coaches write letters to the position players in the middle of the summer. These handwritten letters are not purely meant to motivate them for reasons related to football, but to communicate to these young men that they are cared for while they are in high school and in the years that follow. While many individuals are inspired to get into coaching for competition, coaches invest in the lives of players for their benefit and the future benefit of their families, companies and communities.

Coaches around the country are pursuing all the elements of organization, efficiency and motivation in their programs and with their specific players to produce success. Through the efforts of a coaching staff, it can be learned that leading an athletic program to success must come from the leader. It also must be incorporated into each and every thing accomplished as a team.  The common threads now taught to create success as a football team will be a lasting lesson for players that can positively influence players for a lifetime.