Injury Rates Higher for Athletes Who Specialize in One Sport

The issue of whether high school student-athletes should specialize in one sport or play multiple sports continues to be debated across the country. How prevalent is the practice of specialization and what are the potential drawbacks for individuals who focus on a single sport?

In an effort to find answers to some questions related to sport specialization, the National Federation of State High School Associations (NFHS) Foundation funded a study conducted by the University of Wisconsin School of Medicine and Public Health. While the primary focus of the study was to determine the injury rate for those athletes who specialize in one sport vs. individuals who do not specialize in one sport, the study also provided information about the rate of specialization by male and female athletes.

The study was conducted throughout the 2015-16 school year at 29 high schools in Wisconsin involving more than 1,500 student-athletes equally divided between male and female participants. The schools involved in the study represented a mixture of rural (14), suburban (12) and urban (3) areas, and enrollments were equally diverse with 10 small schools (less than 500 students), 10 medium schools (501-1,000 students) and nine large schools (more than 1,000 students). 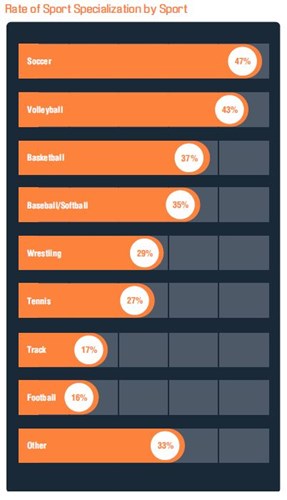 “While we have long believed that sport specialization by high school athletes leads to an increased risk of overuse injury, this study confirms those beliefs about the potential risks of sport specialization,” said Bob Gardner, NFHS executive director. “Coaches, parents and student-athletes need to be aware of the injury risks involved with an overemphasis in a single sport.”

Among those who reported previously sustaining a lower-extremity injury, the areas of the body injured most often were the ankle (43%) and knee (23%). The most common type of previous injuries were ligament sprains (51%) and muscle/tendon strains (20%). 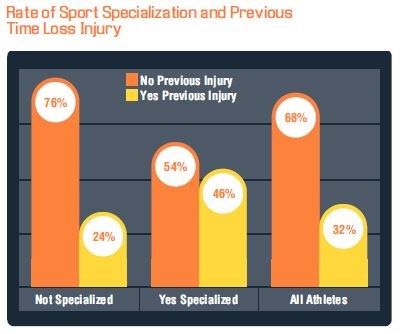 The study, which was directed by Timothy McGuine, Ph.D., ATC, of the University of Wisconsin, also documented the effects of concurrent sport participation (participating in an interscholastic sport while simultaneously participating in an out-of-school club sport), which indicated further risk of athletes sustaining lower-extremity injuries.

Bruce Howard is director of publications and communications at the NFHS and editor of High School Today.

Iowa Multi-sport Athlete Does it All – With One Hand