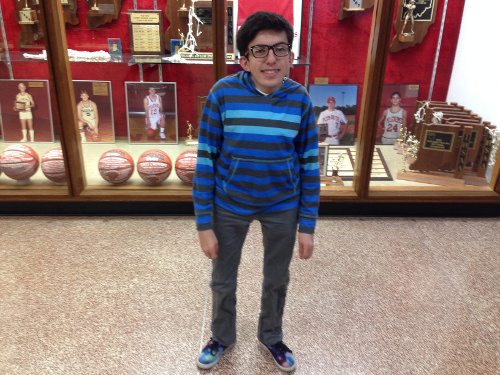 Luke Vervynckt, a junior at Plymouth (Indiana) High School, has been selected as the 2015 Section 4 recipient of the "National High School Spirit of Sport Award" by the National Federation of State High School Associations (NFHS).

The National High School Spirit of Sport Award was created by the NFHS to recognize those individuals who exemplify the ideals of the spirit of sport that represent the core mission of education-based athletics.

Standing 4-foot-6, Vervynckt was born with arthrogryposis (severe scoliosis), has an S-shaped spine, and has a titanium rod in his back. While such challenges might deter lesser individuals, Vervynckt instead simply sees those as speed bumps on his path to success.

With a grade-point average of 4.42 (out of 4.0), Vervynckt ranks second in his class of 264 students. Despite multiple contractures affecting mostly his hands and feet, he plays junior varsity No. 1 doubles for the Pilgrims tennis team and is a returning letterman for a rising program.

“He has a desire to be great in all that he does – both in and out of the classroom,” Delp said. We talk about some of his challenges that he has as far as court coverage and things like that, but we just look at them as things he can overcome. He might be the best on our team as far as placement – that’s how he compensates.”

Vervynckt has endured a series of operations, including one on his club foot at 10 months old, a spinal fusion at five years old, and a December 2013 procedure on his big “hammer toe” to help with his running and overall mobility.

“I think scoliosis has prevented me from being able to be way up there on the varsity ranks, but I think it has really made me who I am today – I don’t give up,” Vervynckt began. “Even if I’m at a disadvantage, I’ll always try my hardest.”

The NFHS divides the nation into eight geographical sections. The states in Section 4 are Indiana, Illinois, Iowa, Michigan and Wisconsin.

Nominations for this award were generated through NFHS member state associations and reviewed by the NFHS Spirit of Sport Award Selection Committee composed of state association staff members.

While the national winner will be recognized June 29 at the NFHS Summer Meeting in New Orleans, Louisiana, the section winners will be recognized within their respective states and will receive awards before the end of the current school year.