In Their Own Words: Don Showalter, Coach Excels with USA Basketball

Don Showalter has been coaching high school boys basketball since 1976, when he became the head coach at Elkader (Iowa) Central High School. He then coached at his alma mater, Mid-Prairie High School in Wellman, Iowa, from 1984 to 2012, leading the Golden Hawks to 446 wins and six trips to the Iowa High School Athletic Association state tournament. Since 2012, the nine-time Iowa Basketball Coaches Association Coach of the Year has been the head coach at Iowa City High School. Showalter also happens to coach some of the best young basketball players in the entire world. Since 2009, he has coached USA Basketball Men’s Development National Teams to seven gold medals in international competition and has gone undefeated (43-0) along the way. Showalter has also coached the 1999 McDonald’s High School All-America Game, as well as the 2005 and 2012 Jordan Brand All-Star Games. A speaker at basketball clinics around the globe, Showalter is also a member of the High School Today Publications Committee. 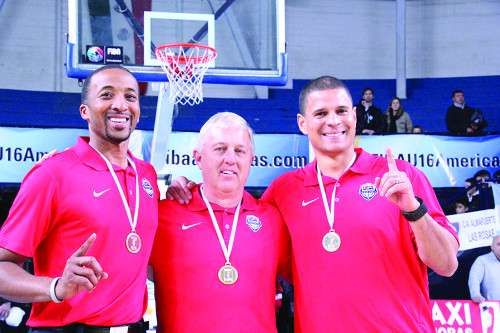 Q. How did you get into coaching?

Showalter: I have a great passion for basketball, and I always knew I wanted to have a career in basketball after I was done playing in high school and college. It was a foregone conclusion that I would stay involved with basketball in some way, and coaching just felt like the natural next step in my career and has definitely been the right fit for me.

Q. What has changed the most in high school basketball since you started coaching? What has stayed the same?

Showalter: Social media has led a big change in terms of how people follow basketball. It’s easier for people to express their opinions now, good or bad. It’s been a huge change that affects both players and parents, and it can certainly be a distraction. It’s just something that you have to be aware of as a coach and be prepared to deal with. There are also a lot more people involved with players now, especially scouts and media. Personal trainers have also become pretty popular even for average players. All that together can distract you from the real goal, but what hasn’t changed is that players still want to work, compete hard and win.

Q. What is the greatest challenge you face as a coach?

Showalter: Because your players change yearly at the high school level, the biggest challenge is to put together a philosophy that doesn’t necessarily include X’s and O’s, because you can’t use the same ones every year. Your culture has to be dependent upon how you do things both on and off the court. Setting the kinds of expectations and standards, like going to class and being on time, are really important to building a culture for your team.

Q. What do you enjoy most about coaching young athletes?

Showalter: I love the daily relationships that you get to build with your players. I think that relationship is the most important thing, so that there is a trust factor between coach and player. There’s nothing better than that and it happens on a daily basis, even off the court. Developing those close relationships with my players is something that I really enjoy.

Q. What led to your interest in becoming involved in coaching USA Basketball teams?

Showalter: Those kinds of things sometimes happen because you’re in the right place at the right time. Back in 1998, I met a few people who were working with USA Basketball and they invited me to coach at the Nike Hoop Summit. Then like with anything, if they like what you do you get asked back, so when FIBA started the U-16 and U-17 tournaments in 2009, I was asked to coach those teams as well.

Q. What are the differences in coaching your high school team and the USA Basketball teams? What is a commonality you have seen in all of your players?

Showalter: Obviously one of the big differences is the physical ability of the USA Basketball players. I have gifted athletes on my high school team as well, but the USA players are certainly elite in that regard. But whether you’re coaching an elite athlete or a regular high school player, they all want to win and get better. I even use the same X’s and O’s with both of my teams. The only difference is in athleticism.

Q. You, no doubt, have had opportunities to coach at the college level. Why have you elected to remain a high school coach for nearly 40 years?

Showalter: Yes, I’ve had quite a few offers to coach in college, but I’ve always felt that my niche was with high school players. I love coaching in high school and I think that at this level you can really affect a lot of lives, more so than in college. I get to develop really good relationships with kids over three or four years, whereas in college, I would have to do a lot of recruiting and that never appealed to me.

Q. What is your coaching philosophy? What kind of lessons and values do you try to instill in your players?

Showalter: My philosophy is all about building a culture within a team, and with individuals on that team. We set standards that we try to live up to on a daily basis, such as trust, communication and pride. Those things set the tone for what you can do at the high school level. That is definitely more important that any X’s and O’s that we teach.

Q. What is your favorite coaching memory?

Showalter: Winning a gold medal seven times has been tremendous, and each time has been different. Even though I’ve been fortunate to win seven, every team is unique, in that it is those players’ first time for winning a gold medal, so that’s always really special. My state tournament teams in Iowa have been special as well, but even my less successful teams are memorable because those players come back after they graduate and still have a lot of pride in the program. Having kids come back and thank you is very rewarding as a coach.