In Praise of School Theatre 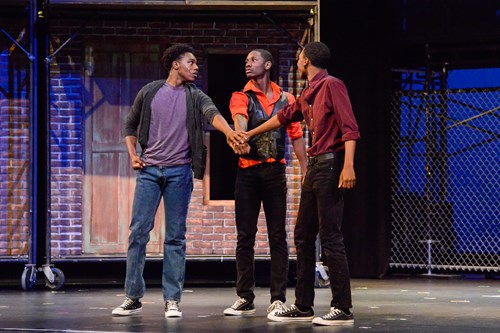 There are 26,000 school theatre programs in the United States. Some of them happen during the school day, others after school—either way, on stages, in auditoriums, cafeterias, and classrooms well into the dinner hour, as students rehearse lines, practice choreographed steps, sing solos, duets and ensemble-wide anthems that tell stories about the rest of us. Nearby, there’s a director-teacher who watches it all, doing their best to encourage and guide the cast to success. Meanwhile, in the noisy scene shop, boards are being measured and cut, platforms built, and set pieces imagined and painted. Elsewhere, there are costumes being rendered, sewn, and fitted. And somewhere, students are busily working in computer CAD and audio programs to create light plots and a soundtrack. All these disparate activities will come together to tell the tale of the play — moments of joy, anger, amazement, and triumph, through a singular, collaborative effort of students whose passion is all their own.

Theatre education is like that but so much more. In the last decade, education has become increasingly focused on the workforce skills students need to be successful citizens. In studies and surveys, business leaders have repeatedly lamented the difficulty of finding workers who could think “out of the box”, and creatively imagine new ideas and solutions to workplace challenges. Theatre is both an academic and arts discipline that not only allows for thinking differently but strongly encourages it. Like much of arts education, it has often been characterized as fluff or an after-school distraction. Nothing could be further from the truth. As noted above, theatre is all about “doing,” and applying the coveted four Cs—Creativity, Collaboration, Critical Thinking, and Communication which nurture independence, confidence, leadership, and the widely touted “grit” that suggests a willingness to roll up one’s sleeves and get things done, all of which help students succeed in college, career, and life.

The data supporting theatre’s value to the workplace preparation, academic success, and social-emotional learning of students is clear. In 2012, the Educational Theatre Association (EdTA) conducted a landscape survey of the field and found that 95% of school administrators believe that theatre experiences improve students overall academic skills and helps increase their understanding the world. And in a longitudinal study conducted by the late arts education researcher Dr. James Catterall, he determined that students highly involved in theatre are more likely to be reading at a high level of proficiency by grade 12. Catterall’s study also found that high poverty students who engage in sustained involvement in theatre benefitted the most from their experience, showing significant gains in self-awareness, motivation to succeed, and improved empathy for others.

Regarding empathy, no academic discipline—not math, not English, not science—nurtures this critically important trait in students the way theatre does. In these highly divisive times, when civil discourse is increasingly rare, theatre promotes understanding, tolerance, and listening. When a student steps onto a stage in character, they are walking in someone else’s shoes and, in doing so, must assume that character’s physical, emotional, and spiritual being in order to communicate with and understand the context of the play’s story and the other characters who populate it.

"There are many challenges we face as a society but in my opinion few tools are more important to our survival than the desire to see through someone else’s eyes. The most important ethical choices of our time require us to understand the experiences of other people, and the willingness to put the well-being of others above our own desires. This requires a balance between analytical thinking and empathetic thinking. Is there another area of study that does that as well as theatre?”

All this said, theatre education faces challenges in our country. U.S. Department of Education data suggests that less than 30 percent of public high schools in high poverty areas include theatre instruction, and the number is even grimmer in elementary schools with only 4 % offering access to theatre.  The EdTA Landscape Survey found most theatre programs rely entirely on box office receipts to support their programs.

Despite these challenges, the rehearsals go on, the sets get painted, and songs and monologues continue to grace school stages from one end of the country to the other. In 2018, nearly 4,000 schools responded to EdTA’s annual survey of high school theatre, reporting an average of 10 performances during that year, with a total average audience of 1,770. Extrapolating these averages to all schools with a theatre program yields a potential audience of 46.3 million for high school theatre across America, comparable to the combined audiences for Broadway touring companies and regional theatres. Were you one of them this year? If not, we encourage you to check out school-based theatre in 2020.

Jim Palmarini is director of educational policy for the Educational Theatre Association (EdTA) and a member of the National Coalition for Core Arts Standards Leadership Team. He has been the editor of Teaching Theatre, the association's journal for theatre educators, since 1990, and senior associate of the monthly Dramatics since 1986.  Mr. Palmarini was awarded EdTA's Founders Award in 2005. He has written extensively about arts education, including articles on methodology, standards, assessment, and a wide range of theatre-specific subjects.

Forensics is a Contact Sport: Speaking the Language of Athletics Can .

In Praise of School Theatre