Currently, there are more than 7.8 million participants in high school sports in the United States. The benefits of playing a sport go beyond the physical impact of improved cardiovascular fitness, strength and balance, and encompass psychological and social factors as well.

These benefits, however, do not come without some risks. The Centers for Disease Control and Prevention (CDC) estimates more than 2.6 million emergency department visits per year are due to youth sports injuries. As sport participation numbers increase, it is more important than ever to minimize risk for all participants.

Catastrophic sports injuries and illnesses are defined as severe conditions that result in death, permanent or temporary disability, or events that would have resulted in death without immediate medical action, such as sudden cardiac arrest. Though rare, catastrophic sports injuries and illnesses have a major impact on the athletes, families, and sporting and medical communities, including both immediate and long-term effects associated with the event, such as the cost of emergency and medical care, psychological and sociological costs to the individuals and sports community, and years of life lost in the case of a fatality. 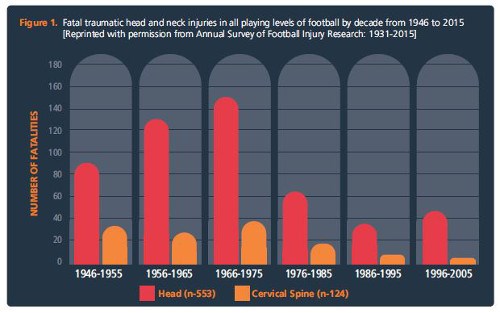 The most common types of sport-related catastrophic injuries and illnesses are due to acute trauma to the head, neck, spinal cord, internal organs or blunt chest impacts (commotio cordis); environmental and exertional-related events such as heat stroke, exertional sickling and anaphylaxis; and sudden cardiac arrest.[2]

One of the ways a safe sport environment can be achieved is through regular surveillance or collection of catastrophic sport-related injury and illness data. Surveillance is the ongoing and systematic collection of data (data in) and the analysis and reporting of these data to those who need it (data out). Surveillance provides both the starting and end points for safety and injury and illness prevention activities.

As an example, from 1965 to 1974 there were on average 19.3 traumatic head and neck injury deaths per year in football.[3] In the mid-1970s, rule changes were introduced banning head-first tackling and a helmet standard was adopted. These initiatives, coupled with improved medical care, resulted in a 60 percent reduction in the number of traumatic head and neck injury deaths in football from 1975 to 1984 (Figure 1). Other similar examples can be found in pole vault, swimming and diving, and cheerleading.

Quantifying how many of these events occur and describing the characteristics of and circumstances surrounding these events guides our prevention efforts (starting point) and determines whether safety and prevention strategies have resulted in improvements (end point).

There is a sufficient need for information about how to prevent these serious events. The National Center for Catastrophic Sport Injury Research (NCCSIR) has been collecting data to provide these starting and end points for football since 1965 and for all sports since 1982. The NCCSIR is a primary source for published and unpublished catastrophic sport injury information.

The NCCSIR has historically obtained information largely from publicly available news media reports and national and state sport organizations, such as the National Federation of State High School Associations (NFHS). In order to understand how to prevent these events in the future, it is critical that we know how many and how often catastrophic events occur. Reliance on news media reports means that only the events that reach the media are captured. For some catastrophic sport-related events, this method may provide an adequate picture; however, for other events that do not receive media attention, we may only get the “tip of the iceberg.” Therefore, in order to be most effective, surveillance systems should strive to actively capture health outcomes as they occur.

To improve the capture of these events, NCCSIR and the Consortium for Catastrophic Injury Monitoring in Sport have developed a national centralized reporting site where anyone can report a catastrophic sport injury or illness: http://www.sportinjuryreport.org. Anyone – parents, athletes, athletic trainers, coaches, school administrators and others – can report the event and basic information about what happened at the reporting site. NCCSIR and the Consortium review these initial reports and then follow up with the individuals in order to collect more detailed information about the injury or illness, including equipment worn, environmental conditions, emergency and medical care provided, and long-term outcomes.

NCCSIR gathers any available information about the event including the sport played, activity at the time of the event, type and severity of the injury, and the outcome. NCCSIR summarizes this information in annual reports submitted to national organizations like the NFHS and groups charged with minimizing risk of injury for participants. Safety and sports medicine committees review this information annually to recommend changes in rules, equipment, coaching and training techniques, and medical care, and to assess whether past recommendations resulted in fewer and/or less severe catastrophic events.

Schools and individuals can assist NCCSIR and the Consortium by reporting catastrophic sport injury and illness events to http://www.sportinjuryreport.org. This reporting site is a major step toward improving the capture of catastrophic sport injury and illness events and increasing our understanding about how they can be prevented. To learn more about NCCSIR and the Consortium, please visit: http://nccsir.unc.edu. 