Three years ago, the Illinois High School Association confronted a historic problem. In the office, nestled away in four different locations, sat the video evidence of nearly 70 years of association work.

On one set of shelves were dozens of canisters of old 16mm film dating to 1947. Not far away sat 1500 VHS videotapes – some as old as 30 years. In boxes stacked in closets, there were several hundred industrial Betamax tapes inherited from a former TV production company. And in an empty cubicle, still more boxes held almost as many DVD recordings of recent events.

The question was whether the association could do anything with the material or would just allow it to accumulate until it either fell through the floor or spontaneously combusted, whichever came first. Eventually the decision was made to preserve the material by sharing it. After all, there was little point in saving the recordings if no one ever watched them. So the IHSA Archives project was born.

The project has run in three phases, more or less simultaneously. The first and most important phase was the digitization of the old media. There is an affordable machine that converts VHS tapes to DVDs – we ran through two of them before finishing that part of the job. Converting the films to digital media requires the work of a commercial outfit, and because of the cost, that aspect of the project is still in progress.

The next phase involved editing the digital copies to remove commercials and other extraneous material. This was the most time-intensive part, and is not strictly required. Finally, the material was uploaded to YouTube (www.YouTube.com/IHSAarchives) where it was made available to the world. The IHSA Archives channel now offers more than 800 full-length recordings covering nearly all IHSA sports and some activities. 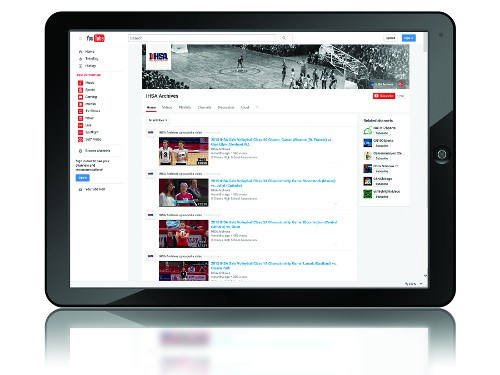 In the almost two years since the IHSA Archives “opened the vault,” the videos have logged more than 100,000 hours of viewing time – certainly enough to satisfy the goal of getting the recordings in front of as many eyeballs as possible.

In addition to the films and videotapes of IHSA state final events, the Archives also hold a couple of nuggets of NFHS history. Two years ago, with an invitation to rummage through the attic of a cabin once owned by H. V. Porter, who served as executive secretary of the NFHS from 1940 to 1958, we recovered 25 films dating to his earliest days at the IHSA.

One film, shot in 1929 at the J. A. Dubow Sporting Goods Company in Chicago, shows the step-by-step production of the hand-sewn “National Federation basketball.” The project did not fulfill its promise, which led to the Federation’s development of the revolutionary molded basketball, which was directed by Porter. The second important discovery was the very first basketball rules film, shot by Porter himself in 1931. Eight decades later, rules films are still an integral component of the NFHS’ effort to educate sports officials and coaches.

Time is of the essence in preserving this type of history. Tape recordings, especially those of low quality, eventually degrade to the point where they cannot be played, and there is nothing that can be done to restore them. Several tapes in the IHSA collection from the late 1980s have suffered this fate. Films generally last a little longer, but if they have a vinegar smell, decomposition has set in and the clock is counting down to their eventual demise.

A project like this takes time and money, it is true. If those resources are not available at your association or school, you may be able to find some organization with a historical bent that can contribute resources to the project. And if you’re looking for a VHS to DVD converter, we’ve got a good one that’s looking for something to do.

Scott Johnson is assistant executive director of the Illinois High School Association. He is the author of two books and serves as the unofficial IHSA historian.