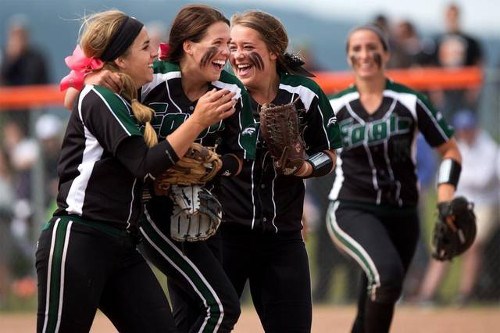 The Eagle (Idaho) High School softball team is hammering home runs and opponents this season. The team has hit 63 home runs this season. That’s just two shy from its total from last season, which tied for the second most by any team in U.S. history, according to the NFHS record book. And, with the Idaho High School Activities Association Class 5A softball state championships kicking off this weekend, the Mustangs have a chance to break the national record of 71 home runs set by Pisgah (Alabama) High School in 2011.

The Mustangs enter the tournament with a 26-0 record, and of those wins, all but five have ended early because of the 10-run mercy rule – 17 have been shutouts. They’re averaging 13.5 runs per game and have outscored their opponents 353-21 this season.

Eagle will take on the Mountain View Mavericks (15-8-1, 12-5) on Friday in the state tournament. The Mustangs defeated the Mavericks three times this season, two resulting in shutouts.

Last week, The Mustangs assumed the No. 1 ranking in the nation in the CBS MaxPreps Xcellent 25.

Maddie Koss is a summer intern in the NFHS Publications/Communications Department. She is a senior at Butler University.

NFHS' Sandy Searcy Named to USA Softball Board of Directors