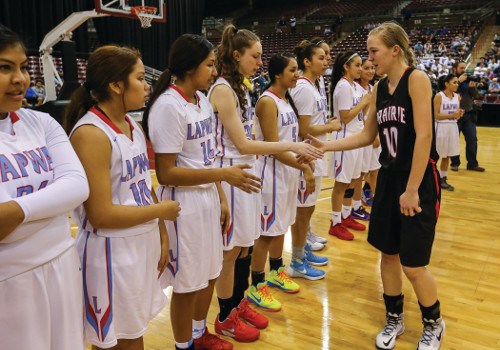 School administrators have a lot on their plates. From working a full school day to supervising after-school activities, they don’t always have a lot of time to spend focusing on their school’s sportsmanship program. Particularly when their school participates in a state tournament, the heightened sense of excitement and high level of competition can lead their fans to do something crazy.

Fortunately, the Idaho High School Activities Association (IHSAA) has put plenty of tools in place to help its administrators encourage positive sportsmanship throughout the year, and has incorporated sportsmanship into the beginning and end of several of its state tournaments to serve as a reminder to the fans present to remain positive.

“We’re trying to get the tournament off on the right foot. We have PSAs that our announcers read so it’s a priority from the very first,” said Julie Hammons, IHSAA assistant director. “I know as they’re there at state tournaments trying to manage their fans, administrators repeatedly say, ‘Hey, we’re being evaluated. Let’s watch what we’re saying to the officials. Let’s make sure that our behavior is appropriate.’

“They use that tool to make sure it’s a good experience and that sportsmanship is being emphasized.”
In addition to the sportsmanship PSAs, the state tournaments for soccer, volleyball, and boys and girls basketball feature the awarding of a t-shirt to an adult fan of each school’s choosing at the beginning of the event.

During each tournament game, the IHSAA evaluates the participating school’s student sections, coaches, players and cheerleaders to determine the overall sportsmanship winner. This award is presented at the end of the tournament as a kind of bookend to the event’s sportsmanship initiatives.

“We used to not evaluate soccer because it’s hard to evaluate fans’ sportsmanship at an outdoor venue,” Hammons said. “But soccer’s one that we’ve struggled with a little bit as far as what’s appropriate at the high school level so we thought it was important to add that piece to our tournament.”

In an effort to assist Idaho’s school administrators throughout the year, Hammons said the IHSAA also provides resources in the form of its Schools of Excellence program. This three-pronged program includes not just the sportsmanship component, but academic and self-evaluating aspects as well, with schools receiving points based on their GPAs and if they advance to the state tournament. The third prong –

Citizenship through Sports – asks schools to look at what they do in their own community to emphasize and prioritize sportsmanship.

“The fact that it’s self-evaluating every single year really helps schools be mindful of where they could improve and so that’s a big part of our sportsmanship,” Hammons said. “We try to give tools that our schools can use to promote sportsmanship. Our administrators are overworked and they all want to do these kinds of things, but may not have the time or the resources.

“The benefit of the Citizenship through Sports model is that it gives them resources they might not have time to create themselves, and it forces them to be reflective on what they’re doing in their schools and what they could possibly be doing to increase that emphasis.”

The top three winners in each classification of the Schools of Excellence award are recognized at the IHSAA’s annual meeting each summer and given a plaque.

“It’s kind of really what we’re all about – the performance piece, the academic piece and the citizenship/sportsmanship piece,” Hammons said. “That’s a very respected prize for the schools and all three pieces are equal.

“I’m pretty proud that it’s not just about who wins the state championship in football. It’s champions on the court, champions in the classroom and champions in the community as far as sportsmanship goes.”
Hammons said the IHSAA is looking into a more comprehensive program in order to reach more schools than just those that advance to the state tournaments in basketball, volleyball and soccer.

“We’re looking at what the possibilities would be without burdening our administrators any more,” Hammons said. “We just try to be that bridge – especially with that self-evaluation – giving them tools they can use so they don’t have to reinvent the wheel.”

Juli Doshan is a former member of the NFHS Publications and Communications Department and now lives in Washington, D.C