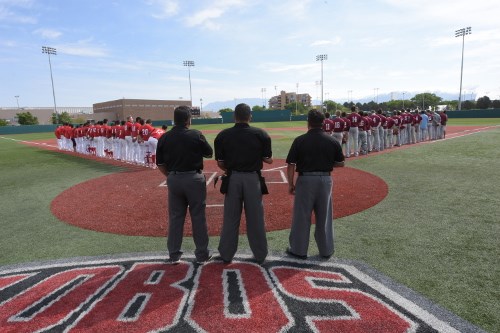 Led by an encouraging report in football participation nationwide, the number of participants in high school sports increased for the 27th consecutive year in 2015-16 according to the annual High School Athletics Participation Survey conducted by the National Federation of State High School Associations (NFHS).

See the full survey on the Participation Statistics page.

Based on figures from the 51 NFHS member state high school associations, which includes the District of Columbia, the number of participants in high school sports reached an all-time high of 7,868,900 – an increase of 61,853 from the previous year.

“The NFHS and its member state associations have taken significant steps over the past 10 years to minimize the risk of participation in football and all high school sports, so this report on the continued strong interest and participation in high school football is very encouraging,” said Bob Gardner, NFHS executive director. “With the adoption of state laws and protocols for concussion management in place, we continue to believe that the sport of football at the high school level is as safe as it has been since the first rules were written in 1932 – and we believe this year’s participation report is confirmation of that belief.” 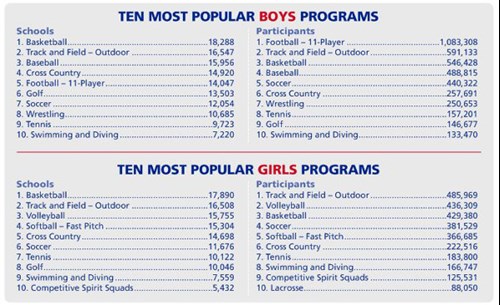 After track and field among the top 10 boys sports, soccer registered the largest gain with an additional 7,753 participants, followed by cross country (up 6,710), basketball (up 4,949) and baseball (up 2,248). Although the top five boys sports remained the same as last year – 11-player football, track and field, basketball, baseball and soccer – cross country moved to sixth place ahead of wrestling, which dropped to seventh after a decline of 7,555 participants. Tennis, golf and swimming and diving complete the top 10 listing of boys sports.

Lacrosse continued its rise among emerging sports with 197,572 total participants to rank 10th in girls participation and 11th for boys. Among some of the non-traditional high school sports on this year’s survey, archery (8,668), badminton (17,645) and flag football (12,093) continued to register increases in participation. Also, while boys wrestling had a drop in participation, an additional 2,000 girls participated in the sport last year for an all-time high of 13,496.

Participation in adapted sports also increased in 2015-16 from 8,483 participants to 9,491 with schools in 12 states now offering these programs for students with disabilities.

The participation survey has been compiled since 1971 by the NFHS through numbers it receives from its member associations. The complete 2015-16 High School Athletics Participation Survey can be found on the Participation Statistics page.

Thanks to Mitigation Strategies, Performing Arts Events Return to Hig.