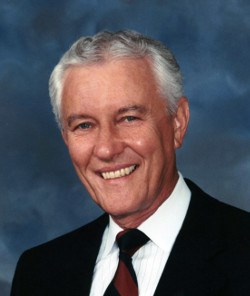 Brice B. Durbin, the third full-time executive director of the National Federation of State High School Associations (NFHS) from 1977 to 1993, passed away January 4 in Topeka, Kansas, at the age of 92.

Durbin was responsible for moving the headquarters to Kansas City, Missouri, in 1979 and starting the nation’s largest in-house sports-related printing operation and beginning speech, debate and music services for the member state associations.

Prior to his 17 years at the NFHS, Durbin was a member of the Kansas State High School Activities Association (KSHSAA) staff for 19 years, including five years as assistant executive secretary and 14 years as KSHSAA executive director. During his time as head of the Kansas association, Durbin was credited with helping launch girls high school sports in the state and starting the 10-yard overtime procedure in football in 1969 that was used at the national level.

Durbin was involved with officiating throughout his career and was supervisor of basketball officials for the Big Eight Conference from 1969 to 1975. After joining the NFHS, he held numerous positions with USA Basketball, including treasurer (1976-78), secretary (1978-80), men’s vice-president (1980-84) and president (1984-88). He also served on the United States Olympic Committee Board of Directors and Executive Committee.

Visitation will be held from 5 p.m. to 7 p.m. CST Thursday at Penwell-Gabel Cremations, Funerals and Receptions, 1321 S.W. 10th Avenue in Topeka, and funeral services will be held at 10 a.m. Friday, January 10, at the St. John’s Evangelical Lutheran Church, 901 S.W. Fillmore in Topeka, with interment at Mount Hope Cemetery.

Memorial contributions may be made to the Trash Mountain Project, 4110 N.W. 62nd Street, Suite B, Topeka, Kansas 66618, or St. John’s Evangelical Lutheran Church.

NFHS Summer Meeting to be Held Virtually This Year

Despite Loss of Handshakes, Sportsmanship Will Continue in High Schoo.