Forensics is a Contact Sport: Speaking the Language of Athletics Can Help Your Speech and Debate Program Thrive 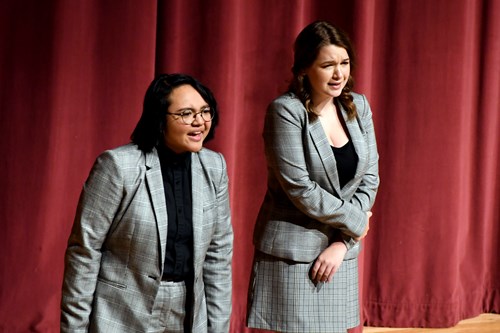 It is often said that to be successful in public service, one must be able to raise the level of discourse and educate the electorate. The same challenge applies to coaches in the speech and debate world—and the task of educating our communities about what forensics is and why they should care is more critical than ever. Capitalizing upon a community’s existing understanding of an athletic framework may be one of the best ways in which to accomplish this task.

Even if we don’t follow a particular sport, it is likely that we still possess general knowledge of what a basketball game looks like, the basic rules governing football (whether American or European!), or the dimensions of a baseball diamond. Before students, their families, or any other community stakeholder attends a speech and debate tournament, does anyone really know what we do each Saturday in the dead of winter?

Thus, as we build and sustain our programs, it is critical that we strategically engage all parties in a manner reflective of what our larger society already knows and understands.

Community youth programs and recruitment pipelines are essential for high-powered athletic programs. Without the equivalent of a Hot Stove or AAU organization, what’s a debate coach to do? Begin with the basics. During a relative lull (!) in the competition season, create opportunities for team members, especially upperclassmen, to travel to the middle school(s) in your area to demonstrate events and stoke enthusiasm. Recruit rising freshmen by utilizing gifted/honors class rosters, teacher/administrator recommendations and, if applicable, the National Junior Honor Society rolls. Build a targeted recruitment list, write letters, and make personal phone calls to students and their families.

Later, move toward more complicated goals. Does the middle school have a dedicated speech and debate-oriented elective? Would you be able to work with a teacher and/or administrator in order to create one? Do gifted and talented pull out services in the district’s elementary schools possess any alignment to forensics categories? They could and should! Administrators and coaches understand the language of pipelines and recruiting classes—use the lingo as you pursue your agenda. It may open doors.

It pains me to admit that, as a history major and social studies teacher by training, I neglected to do enough in this area as the head coach of the Wooster High School Speech and Debate Team during my four-year tenure from 2007-2011. Thankfully, I was able to rely on parents and community members to steer things in the right direction. As parent, former coach, and frequent judge Dan O’Rourke has both discussed with me and written in Rostrum [Winter 2014, Vol. 88, Issue 3], writing a team history can be a productive and powerful way to connect team to community. Chances are that your high school athletic department and booster organization can tell you the dates and back stories of every state, regional, or district title, individual milestones and achievements, and much more about their programs. We should be able to do the same.

Dan and his son Morgan scoured a century of records in order to produce their book, A Good Town Speaking Well: A History of the Wooster Speech and Debate Team. In the process, they helped us to connect to our own history in powerful ways and generated valuable publicity for an already storied program. They wrote of champions and legacies and commitment to causes greater than one’s self. They regaled readers with tales of tournaments and travels and titanic struggles against both actual opponents and the weather. Save for the details, we could be talking about any sports program in the nation. Community members will relate to these stories. Consider it an imperative to tell them.

Good news for all the Lincoln-Douglas debaters out there: Factual, value-based approaches to recognition on par with your school’s athletic counterparts are winners with school administrators. Call it a team, not a club or an activity, and make it clear that you expect to be treated as such. It is only right that a school that awards varsity letters for athletic participation and, often, marching band would also award varsity letters for forensics. It is only just that a school that holds hallway send-offs for state qualifiers in athletic competition would do the same for the speech and debate team.

In conversing with school leadership, propose thresholds for such recognition proportional to those demanded in the world of sport. For example, tenure of participation at the varsity level and distinguished achievement are often requirements for a letter award in high school interscholastic athletics. Author a proposal that requires team members to complete two full varsity speech and debate seasons in good standing and the earning of, say, the Association’s Degree of Excellence (150 points) in order to earn a varsity letter in speech and debate. Only the myopic administrator would reject such stringent criteria (and excellence, no less!). Only a school with a self-destructive culture and climate would deny your students participation in a brief hallway pep rally to celebrate state-level achievement. It’s win-win.

“Forensics” on a letter jacket can become a point of pride rather than a target for bullying if promoted by a critical mass of students. Many students forego the letter jackets these days, but hoodies, team warm-ups, and that old stand-by, the team T-shirt, are still as popular as ever. Your team should have them and they should be designed in school colors. By the same token, the coach sets the tone for this outpouring of school spirit. Casual Fridays, pep assemblies, athletic contests, speech tournaments, and more represent myriad opportunities to link your program to the larger esprit de corps and mission of the school.

You are a head coach and your team is a team. When you and your team dress in a manner and style similar to your athletic counterparts, it will send the message that your school is unified—and other teachers, administrators, and community members will take notice.

Inform (and Persuade) with Strategic Language

Weekly press releases and strategic communication with school and district administration are essential. Reading ballots is still a good way to pass the time on a long bus ride home, but it is increasingly important to spend some of that time rolling out team stories on social media and preparing a press release to parents and local media outlets. High school athletic departments tweet in-game updates and provide releases to local newspapers—we should do the same.

Additionally, strategic language is important. Instead of simply reporting a fourth place finish at a nameless local tournament, emphasize how many teams were competing (e.g., 4th among 21 teams competing), the location of the tournament, and individual tournament champions. Establish a league championship and declare individual league champions in each event. When providing interviews for members of the local media, find ways to equate speech and debate to track or swim meets (or other recognizable athletic competitions) and discuss forensics in visceral terms. Speech and debate tournaments (especially at the upper echelons of competition) are just as physically and mentally exhausting as their athletic counterparts—use language that illustrates the point.

When new head football coaches are hired, they are often fêted by the community and expected to return the favor. They aren’t just putting in time on the gridiron or in the weight room; they are attending community events, conducting fundraisers, and maintaining a strategic presence at everything from district feeder schools, community organizations, and the local grocery store. We can learn much from this example. We can be joiners (Rotary, Kiwanis, fraternal organizations, etc.), attend fundraisers, and ensure that our students are consistently serving (and performing) in public. Perhaps most important of all, we can build relationships with other coaches and the athletic director. These connections can be the most important of one’s career.

The strongest speech and debate programs have found ways to elucidate their identity and value to the larger community. I submit that a critical way in which to accomplish this is to utilize the strategic language and methods of successful athletic programs. As education budgets continue to tighten, we need allies and advocates more than ever. The more community members who see speech and debate programs as serious, competitive teams and not just after-school clubs, the stronger that advocacy will be. Let us take a greater role in defining our status within the larger community—and let us thrive.

This article first appeared in the 2015 Winter issue of Rostrum, the official magazine of the National Speech & Debate Association (NSDA). Learn more about the NSDA at www.speechanddebate.org.

Forensics is a Contact Sport: Speaking the Language of Athletics Can .